Home>Diseases of the ear, nose and throat (ENT)>Symptoms and treatment of underdevelopment of the pinna

Symptoms and treatment of underdevelopment of the pinna

The concept of the underdevelopment of the pinna

Underdevelopment of the ears is a very rare disease. For the majority of defects can not determine the cause. In some syndromes proved hereditary nature of the disease.

The symptoms of underdevelopment of the pinna 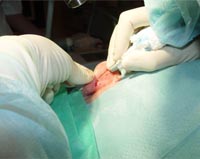 Unfortunately, surgical treatment of children withhypoplasia of ear may not be earlier than 7 years of age, as it is at this age the child becomes pinna size almost the same as an adult. To create the skeleton of the ear using inorganic materials (silicone, PTFE, polyethylene) and cartilage grafts. In cases where there is a bilateral disease not only ears and hearing loss previously shown wearing a hearing aid (hearing aid) in order not to cause a delay of psycho-speech development in children. Modern devices can be used in children in the first year of life. In some cases, children aged 3-4 years with a 2-affected side can try to improve hearing surgically. When a unilateral lesion sluhuluchshayuschie operation is carried out in very rare cases. An alternative to surgery is the manufacture and wearing dentures pinna, the method is widely spread abroad.

The results of cosmetic treatments currentlytime, although great, but still continues to search for new materials and methods of plastics, in order to maximize the re-create such a complex organ as the shape pinna.

Absence of the ear is not in any way associated withmental and physical abilities of children. Identify associated malformations and determine the degree of risk of intellectual and physical development is only possible through an integrated examination of these children. Therefore, only to abandon the children for "cosmetic" reasons of crime.