Each of us is aware of: It is full of bad - but what exactly is the harm of excess weight and, most importantly, how to evaluate the extent of this damage, known units. Doctors offer all people the full test, the results of which allow us to judge how obesity has become destructive to health.

Despite the differences in weight and aestheticpreferences, most of us is sure to be fat is bad. Obesity not only deprives a person of visual appeal and the possibility to live a normal active life, but also kills the health, striking across the board, affecting the work of all organs and systems.

Unfortunately, fat people do not always realize thethe danger posed by excess weight. The lack of proper motivation to lose weight, which should not be striving to please the partner, and the desire to improve their health, leading to a sharp decline in the effectiveness of diets and even more weight gain. 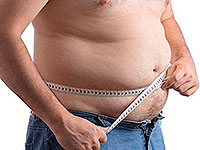 Excess fat - it's bad, but not all body fat is equally dangerous to health. The greatest harm comes from the visceral fat, which is located between the internal organs of the abdominal cavity.

The causes of abdominal obesity, however, asany other type of obesity, doctors believe the disruption of food satiety center, reducing the level of serotonin, leading to binge eating disorder, a sedentary lifestyle, heredity and hormonal disorders.

Visceral obesity often affects men thatoften associated with low levels of testosterone, affects not only sexual function, but also on the course of metabolic processes. In women, fat deposits in the waist form a type of shape "pear" or "apple".

Assess the degree of visceral obesity can be a simple test - measuring waist circumference.

For men shall be considered acceptable waist circumference up to 92 cm, for women - 80 cm. All that is outside these limits, he says there is a threat to health.

Using these indicators, the doctor can calculateatherogenic index, which reflects the risk of developing atherosclerosis in a specific person. If the atherogenic index of greater than three, the likelihood of the development of atherosclerosis is extremely high, and thus the threat of a sudden heart attack and stroke, able to bring to death, is quite real.

All fats in the blood are associateda state that is represented by lipoproteins. High-density lipoprotein (HDL) is considered to be "useful", they take cholesterol from vessel walls and transport it to the liver, where excess cholesterol is processed to a state of bile acids and excreted from the body.

Thus, HDL protects against atherosclerosis. Reduced levels of below 0.9 mg / dL for men and less than 1.15 mmol / l in women is considered dangerous.

Low-density lipoproteins - the "bad". They are "dragged" cholesterol and triglyceride blood vessels inside the cell, and thus promote its deposition, that is involved in the development of atherosclerosis.

Increased LDL in the blood of men above 1.81 mmol / l, and women above 2.2 mmol / l is considered a dangerous disease standpoint.

Blood for analysis of lipid profile gives up in the morning, on an empty stomach or at least 12 hours after the last meal. 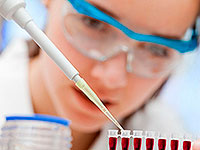 Obesity risk of developing diabetes type. The predecessor of the disease is considered to be a state of impaired glucose tolerance.

A blood test for glycosylated hemoglobin to diagnose the state of impaired glucose tolerance.

Glycated hemoglobin - a stronghemoglobin sugar compound, which is formed during the increase in blood glucose levels in erythrocytes and continuing throughout their life, that is, within 120 days. In other words, if, during the three months was observed at least once an excessive rise in blood sugar levels, a trace of the event will remain in the "memory" of red blood cells.

In normal glycated hemoglobin levels of less than 5.7%, it exceeded suggests that being overweight has become a cause of diabetes.

Blood for analysis of glycosylated hemoglobin gives up in the morning on an empty stomach.

The most common condition that causes obesity,considered hypothyroidism. If all efforts at weight loss in vain if diet and exercise do not bring tangible results, it is necessary to check how the thyroid gland works.

The thyroid gland secretes hormones that regulatefor all metabolic processes in the body, reducing its function slows down the digestion of fats and facilitates their accumulation. Functions of "thyroid" stimulated by thyroid stimulating hormone produced by the pituitary gland located in the brain of man. The level of this hormone can be judged on how the thyroid gland works: increased TSH level indicates its hypofunction, the consequence of which may be overweight.

A blood test for thyroid-stimulating hormone level is held in the morning on an empty stomach. Previously, a few days should exclude smoking and physical activity.