Home>Endocrinology>Methods of treatment of hyperprolactinemia

Methods of treatment of hyperprolactinemia

On hyperprolactinemia Treatment is aimed primarily
restoration of disturbed gonadal function and fertility (the ability of an organism to produce mature seed) in women,
and men, and in the presence of prolactinoma - reduction of tumor mass.

In all forms of hyperprolactinemia the main treatment is
medical that the presence competes with prolactinomas
surgical and radiation techniques. 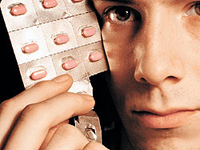 Bramokriptin - first semisynthetic ergot alkaloid,
found wide application in the clinic since 1972 bromocriptine is a drug of the first row, with
destination which therapy begins hyperprolactinemic
conditions requiring medical treatment.

Bromocriptine after oral administration is well absorbed.
Reducing the level of PRL (prolactin) begins 1-2 hours after taking the drug,
reaches a maximum, i.e. PRL concentration reduction by more than 80%
5-10 h, and remained at close to the maximum level for
8-12 hours. Bromocriptine treatment begins, usually with low doses
(0.625, 1.25 mg is usually at bedtime with food to prevent nausea and
orthostatic hypotension), on increasing their 0,625-1,25 mg every 3-4
days, until reaching a total dose of 2.5-7.5 mg per day
(Host fractional 2-3 times a day with meals). dose selected
individually controlled level PRL (prolactin) and optionally
increased every two weeks.

Side effects from the drug during the first few days
treatment some patients noted the presence of mild nausea or
more rarely, dizziness, weakness or vomiting, which, however, are not so
strong enough to require discontinuation of therapy.

Currently prostatectomy (dobrakachestvennoy tumor removal) is not the method of choice for
treatment of patients with PRL-secreting tumors. Patients with
microadenomas manage to produce selective transsphenoidal
prostatectomy, but a significant number of patients (20-50%) for 5
years after surgery develop a recurrence (recurrence of) hyperprolactinemia.

The operation's success is mainly determined by the size of the tumor (it
proliferation) and experience of the neurosurgeon. Smaller adenoma
more amenable to surgery, pituitary tumors larger than
sizes. An indicator of the long-term effect of the operation is
postoperative levels of PRL (prolactin) in the blood serum. If after 10-15 days
after surgery or normalizing levels reduce PRL (prolactin) occurs,
You can think of the incomplete removal of adenomas. In such cases shown
combination treatment.

Since the positive effects after exposure prolaktinomy
develop gradually and take full effect before the development takes place until 12-18
months, as well as possible complications (necrosis of the brain tissue damage
optic nerves, in the long term - hypopituitarism), radiation
prolactin therapy is used in exceptional cases and not always
effective. Indications for radiotherapy are prolactin
inefficiency and intolerance to medication, a large
residual volume of tumor tissue after surgery and the presence of
contraindications to surgery or patient refusal to
surgical treatment.

Thus, the treatment requires hyperprolactinemia
differential (selective) approach based on clinical and biochemical,
X-ray data and includes both agonist monotherapy
dopamine, surgery or radiation, and a combination thereof
various embodiments.

To treatment should be approached strictly individually. since both
drug therapy and prostatectomy effectively reduce the level of PRL
(PRL), serum, both of these methods can be used to
the treatment of hyperprolactinemia tumor genesis.

Drugs that decrease the level of PRL (prolactin), begin to act
fast, and assign a name to them prefer to use as a
primary means of treatment.

Operation, if successful, has the advantage of
a one-time procedure, but may interfere with the normal functions of the front and
posterior lobe of the pituitary, resulting in patients who have previously suffered
Only hyperprolactinemia, may develop transient or
permanent hypopituitarism and diabetes insipidus.

Medication and surgery are not necessarily excluded
each other. In severe cases, when the patient has a tumor larger
sizes may be required dopaminomimetikov both before
and after prostatectomy.

The increase in mammary glands in males