The only way to protect themselves from anxietyof lenses, solutions or broken glasses - a surgical intervention. The revolutionary technology of LASIK laser vision correction has helped millions of people get rid of the need to wear glasses or contact lenses in the world.

The intense rhythm of modern lifeIt assumes constant readiness for rapid change activities. Heavy office day at the computer; evening visit to the fitness club with a game of tennis, a hundred meters in the pool and going to the sauna; at the weekend party with friends at a nightclub - all the inherent attributes of the life of modern urban dweller that make our eyes work hard. It is especially difficult for those whose eyesight is imperfect - because even the most advanced glasses and contact lenses can not be compared with the living eye in the ability to adapt quickly, and also a need for ongoing care.

The only way to protect themselves from anxietyof lenses, solutions or broken glasses - a surgical intervention. The revolutionary technology of LASIK laser vision correction has helped millions of people get rid of the need to wear glasses or contact lenses in the world. It is the most safe and effective method for the correction of the most common types of visual impairment:

A separate problem is the agehyperopia (presbiopsiya) - a violation of refraction of the eye associated with age. Until recently, the radical treatment of age-related long-sightedness did not exist. In 2006 in the UK ophthalmologist European Medical Center (EMC) Raid Elias had an operation on laser correction of age-related farsightedness. In 2008, for the first time in Russia, Dr. Elias carries out a similar operation in the Department of the European Medical Center Ophthalmology. 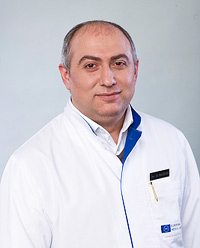 Leading specialist ophthalmologist surgeon, Ph.D.medical sciences. He studied and practiced in the Moscow Eye Microsurgery Center (Institute. Fedorov), trained in a variety of foreign clinics. Dr. Raed Elias is a member of the American Society of Cataract and Refractive Surgeons (ASRCS), the American Academy of Ophthalmology and the Russian Society of Cataract and Refractive Surgeons. Since 1996 he has headed the Department of Ophthalmology and Laser Surgery EMC eyes. It specializes in laser vision correction operations, as well as surgical treatment of various pathologies of the eye. Graduate for the laser correction of age-related farsightedness (presbyopia). Speaks Russian and English.

Department of Ophthalmology is equipped with EMCcomputer fifth generation excimer laser VISX Star S4, as well as the system of wave Wave Scan data, allows for the most accurate diagnosis of the entire optical system of the eye.
laser Jobs VISX STAR S4 IRIt based on entirely new principles. This is not just a correction of existing refractive defects, and a radical improvement of quality, in which is possible to achieve postoperative visual acuity of more than 100% (the so-called "superzrenie"). Such good results are due to the presence of a system of «eye-tracking» - for an eye tracking system that provides accurate work of the laser beam by a given algorithm, even when the patient's eye movements, and new software that controls the processing of the cornea with a laser beam at each point.