What kind of disease keratitis

What is keratitis? What are its symptoms and treatment? For those who are faced with keratitis, these questions are very important. The answers you will learn by reading this article.


What kind of disease keratitis

Keratitis - an inflammation of the cornea. Inflammation, as we know, can be caused by many factors, but in the case of conjunctivitis, the cause is always the same - an infection. If developed keratitis, so on the surface of microbes multiply eyes. The cornea - the eye is a protective cover, but because it is fairly resistant to damage and a variety of infections. This stability enough to withstand the "accidental" microbial invasions.

The cornea every second "knocking" thousandsmicrobes, like gnats in a moving car windshield glass. And these bacteria are invariably killed (in a collision) or bounce off to the side. Functional reserves of the cornea is enough to resist this daily onslaught. However, in some cases, even a hardy and well adapted structure of the cornea, can not cope. This happens mainly when infected with neighboring structures.

Usually, the situation looks like this: Bacteria, being unable to overcome the cornea or even live on it, "switch" to the more vulnerable elements. Relatively easily they are able to "conquer" the conjunctiva. There's the number of germs increases many times, and they always try to "catch" of the cornea. Given that the number of the pathogen is now great, and the host, it is possible exhausted other disease (remember that cause conjunctivitis are often viruses - pathogens SARS), the chances of success increase microbe.

Regardless of the nature of conjunctivitis (viralhe or bacterial) and, consequently, on the type of organism (Streptococcus aureus, adenovirus, etc.), over time inflammation can spread to the cornea. Another potential source of danger - the inflamed lacrimal sac.

In rare cases, keratitis caused by germs brought to the eye with blood, but this occurs in exceptional cases (for example, blood poisoning - sepsis). 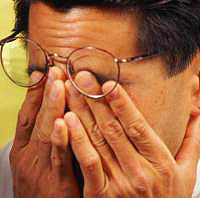 Symptoms often resemble keratitis conjunctivitis. One of the first - a symptom of "sand in the eyes", that is, burning sensation, pain, inability to normally wide open eyes. Very often, this feature is complemented by lacrimation (violent or not), redness of the eyes.
The characteristics of keratitis - it is, above all,corneal opacity (because it is on it is localized inflammation). Needless turbidity may not be noticeable, but because of the transparency of his eyes is greatly reduced, and hence worsens and vision.
However, in most cases, pathologicalprocesses in the eye is clearly visible. First, there are formed protruding muddy "bumps" (infiltration), then they gradually dissolve, leaving behind a cloud center. It is clearly visible, especially when compared with the healthy eye. Cornea here looks more dull, matte, or even rough.
In rare cases, a severe form of the disease, after the disappearance of "bumps" corneal ulcer occurs in its place.
As a rule, very difficult runssyphilitic keratitis. At the same ailment haze "starts" from the very depths and slowly grows, gradually covering the entire cornea. Then, in this area grow the vessels, and vision in the affected eye often completely lost.

How to treat keratitis

The mainstay of treatment of keratitis, as well as many othersinfectious processes - antibiotics. They are used in the form of drops and ointments. Beli disease becomes severe course, additional medication is administered orally in the form of pills or injections. the so-called "absorbable drugs" are used to eliminate the haze. Good effect gives physiotherapy. It is used after decrease in acute inflammation. Helps prevent the deterioration of vision and ultrasonic therapy, and radiotherapy (used to suppress the inflammatory process).

The effectiveness of treatment depends, firstly, on the -timing advance and secondly, on the nature of the inflammatory process. If the inflammation is superficial, does not penetrate into the body, the cornea, it is usually possible to achieve complete resolution of opacities, and after the illness retreat, vision in the eye is completely recovered to normal. If the inflammation deep, then chances are that at the end of therapy on the eye remains dull spot increases. Syphilitic form of the disease is usually difficult to treat.

Especially dangerous keratitis with centralfocus location. This "inconvenient" localization covers a field of view "that gives cash discomfort to the patient. Furthermore, if the haze is large and at the time of disease in the eye vision practically disappears, then there is a risk of blindness as a result of obscure amblyopia.