Burning in the stomach

Do you ever had heartburn? The answer suggests itself. Do you know why it occurs and how to avoid it, and most importantly, what it is dangerous?


For those who do not know

Heartburn is called a feeling of warmth or burning

"pit of the stomach "- the
It exists in the upper abdomen and lower chest (or
breastbone). Sometimes heartburn extends up, reaches even to the neck and
mandible. Often, it is accompanied by increased salivation,
bitter or sour taste in the mouth.

All admit, no one out 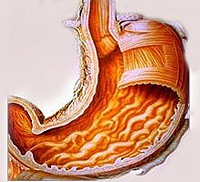 The main reason due to which there is heartburn, the poultry
medical language is called "gastroesophageal reflux

". "Gastro" -
Latin stomach, "esophagus"- The esophagus, and the mysterious word "reflux"
(Not to be confused with reflex) represents motion or regurgitating
direction. In other words, gastroesophageal reflux (sounds like
magic spell from the book of the Harry Potter) - it is only a
getting into the esophagus of the stomach contents, that is the inverse of its cast.

As is known, the basis gastric contents - a hydrochloric acid
very high concentrations. The stomach is protected from its caustic effects, and
that's esophagus - alas. At the junction of these bodies (called
cardia) is the muscle fibers which comprise a dense ring
opening therebetween. This muscle (sphincter, ie "constrictor")
operates so that only one-way movement of food - from
the esophagus into the stomach.

If it ceases to cope with their responsibilities, sour
It begins to penetrate the stomach contents into the esophagus. This state
It called the failure of the cardia. As mentioned above, the esophagus
vulnerable to the destructive action of hydrochloric acid, burning
its inner shell. Here are some of the esophagus flour and give what we
We call heartburn.


Why is there an incompetence of cardia

And why muscle gates close tightly? The reasons are many, and they can be conditionally divided into "disease

From "no disease" often causes heartburn over a hearty meal,
simply overeating. Filled to overflowing stomach is stretched beyond
measures the diameter of the cardia and because of this increase. It is understood that
stretched muscle-flap can no longer work on the conscience. Same
It happens when we stretch the stomach is not food and gas - they are
in sparkling wines, beer, lemonade and other carbonated beverages ...
Now you understand why from them is heartburn?

And heartburn comes from coffee, pickles. from
fried potatoes, oranges and so on. d., and so on. n. the list is to
infinity. Each has his own, and each may, by writing it
somewhere in memory, turn away from foods that cause heartburn,
as if they were not enticing.

Of the other "is not a disease" it makes sense to mention the age-weakening
esophageal muscles, which is felt somewhere after 40 and, unfortunately, not
is subject to correction. But obesity and smoking - is not the last
causes heartburn - this is a "disease"From which it is necessary to get rid of.

Gastritis (inflammation of the stomach lining) - one of the most frequent
perpetrators heartburn. When gastritis mucosal damage becomes less
stretchable. Because of this, the pressure in the stomach after meal increases
faster, and hence more difficult to fulfill its sphincter valve function, and
he begins to act up.

Among other ailments that cause heartburn, esophageal hernia call
aperture. It's not too dangerous thing, but not so on
stomach ulcer and development of neoplastic processes in the stomach and esophagus.
Meanwhile, the first symptom of a serious illness called just
It is still the same, though harmless heartburn.


Doctor, I have heartburn!

You find yourself heartburn does not necessarily rush to the doctor. At first
it is necessary to understand what food it is, and try to eliminate it from the
diet. It is important not to overeat. For this we need to abandon
as giant portions and eat more often but less. Do not forget about drinking. And
about the order to lose weight and quit smoking - even to speak it is not necessary.

When running to the doctor? Once the heartburn begins to interfere with the live,
ie if it occurs almost every day, or is accompanied by belching and
abdominal pain. There can not be to delay.

To determine the cause of heartburn a doctor is likely to prescribe
gastroscopy. This method allows to significantly explore the top
sections of the digestive tract. With the results in the hands of doctor
advise what to take, how to exterminate heartburn.

Until now, there is an opinion that should be taken for heartburn soda. No,
do not. Nothing good from this will not happen: first, the soda itself may
esophageal mucosal damage, and secondly it causes increased
flatulence that only stretches the stomach. Looking for heartburn
drugs belonging to the group of antacids (Almagel,
Maalox, Aluminium phosphate gel, etc.). And someone manages to get rid of it,
simply drinking a glass of warm water or milk.

This seemingly small thing - heartburn. But it's nice to not feel like a heretic, who was sentenced to be burned from the inside!