What is achalasia? What is gastroesophageal reflux disease (GERD) or reflux esophagitis? What is a hiatal hernia? What is chronic esophagitis? The answers to these questions can be found in the article.

Esophagus - digestive system department, located between the pharynx and
the stomach. Reducing, esophageal wall is pushed in food com
stomach. It so happened that the esophageal diseases are often paid very
little attention. Mountain Written articles about the stomach, intestines, but somehow
side bypass esophagus, only briefly mentioning occasionally on "unclear" achalasia and esophagitis.

Why is this happening? Is this one of the most persistent human body organs?
Not at all. Diseases of the esophagus are quite a few. And often people find themselves in
symptoms of a disease of the esophagus, referred it to the heart, stomach, spine
and etc.

The purpose of this article - do not send everyone to search at "new sores".
A brief talk about the most common diseases of the esophagus. AND
We will start with the most frequently mentioned achalasia.

Pain and heaviness in the chest, appearing shortly after a meal. Fullness
in the epigastric region. Regurgitation of food. Often drinking during the meal, the person
It facilitates the passage of food. At the same time the need to drink is often referred to "habits from childhood".

Synonyms: cardiospasm, megaezofagus (a significant increase in size of the esophagus, occurs as a malformation or by a pathological process). In this disease there is non-disclosure (insufficient disclosure) lower
esophageal sphincter causing food stagnates in the esophagus without penetrating
in the stomach.

Cause of the disease is unknown. But there are indications of a violation of the nervous apparatus
esophagus (its so-called "immaturity").


For esophageal achalasia following clinical manifestations are characterized by:

In the treatment should avoid physical exertion and stress. Recommended
frequent, smaller meals up to 6 times per day.

Medicines prescribed by a doctor. Used nitrates, anticholinergics,
calcium antagonists, sedatives, antacids. With the ineffectiveness of shows
kardiodilyatatsiya - expansion of the lumen of the esophagus special balloon.

What is gastroesophageal reflux disease (GERD) or reflux esophagitis

Symptoms are divided into esophageal and vnepischevodnye.


For esophageal symptoms include:

Medications must be taken under medical supervision during exacerbation of the disease,
when a simple normalization of the power fails. Assign antacids (Maalox,
Aluminium phosphate gel), blockers H2-histamine receptors (ranitidine, famotidine), broth
flaxseed, Reglan, cisapride, and others. With the ineffectiveness spend antireflux
surgery.

What is a hiatal hernia

As you know, in normal diaphragm separates the abdominal cavity from the chest. This kind of
a barrier having a plurality of apertures through which the blood vessels, the esophagus,
nerves, etc. of the abdominal thoracic cavity.

Hiatal hernia - a hernia from which visual way
not determined. At the same time there is a shift of the esophagus (and sometimes part
stomach, bowel loops) through the esophageal opening of the diaphragm from the abdominal in
thoracic cavity.

It occurs in 0.5% of the adult population, 50% are asymptomatic.

Hiatal hernia occurs due to stretching of the connective tissue membrane that
normally hermetically separates the chest cavity from the abdominal.


Features of the pain associated with hiatal hernia:

Methods of diagnosis and treatment of gastroesophageal reflux disease are identical. With the ineffectiveness of conservative
therapy, surgical treatment is used.

When a hiatal hernia is not suitable for work related to the tilt of the body and stress
abdominals. Sleep should be raised with headboard (2-3 pads), mainly
on the right side.

What is chronic esophagitis 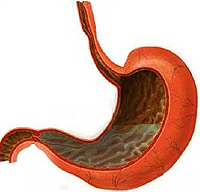 Another disease of the esophagus, which many perceive as quite harmless "sore"Which "is almost all" and always
she goes" - Chronic esophagitis. Often credited with its manifestations
diseases of the stomach. A burning sensation behind the breastbone when sin immediately on the plague (and with
age, heart or fashionable low back pain).

In some diseases of the stomach, however, esophagitis may develop, but it
It is much less common than people think.

There are also specific esophagitis - in syphilis, tuberculosis, fungal
and other diseases.


The disease is manifested by the following symptoms:

Diagnostics. In general, the analysis of the blood due to chronic bleeding
It can be a picture of iron deficiency anemia. Spend fluoroscopy, radiography
with contrast. But most often performed esophagoscopy - swallowing "hose".

a biopsy is performed to confirm the diagnosis (take "a piece of the shell"
esophagus for analysis). This is a painless procedure.

In exacerbations of medicines prescribed by the doctor. The main task - to anesthetize (Novocain,
antispasmodics, in severe cases, morphine). Symptomatic therapy.

For prophylaxis can be treated with antibiotics.