What the doctor-gastroenterologist can tell their present and future patients? Same as the other doctors: the disease is better not to treat, and prevent. 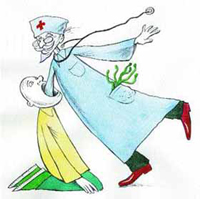 It is believed that the cause of all absolutely gastroenterological diseases is "Wrong" food: fast foods, chemical soup, irregular meals. This is not true.

For example, gastritis and peptic ulcer disease is much more linked to the bacterium Helicobacter pylori, rather than with errors in diet.

Ironically, because of the power suffers a majorway the stomach and intestines, and liver and gallbladder. A diet consisting exclusively of high-calorie foods, sugar, sweets and animal fats - one of the main causes of gallstones and steatohepatitis ( "fatty liver").

Restriction of these products (and therefore weight loss) can in many cases not only to prevent worsening of the disease, but also lead to recovery.

Keep in mind that the digestive tracthealthy person is able to easily digest anything. But there are some products (spices, fatty and fried foods, citrus fruits, coffee, chocolate, carbonated beverages), which make the digestive system work in "emergency mode".

Now fast food. Drinking it has always been difficult: after all the heavy high-calorie food. Do not be afraid, it will not kill you. Healthy people can afford to eat fast food from time to time. Better to consume fast food than starve because long breaks between meals leads to stagnation of bile and provoke the formation of "sand" in the gall bladder. And this is serious.

1. Alcohol (Any, including beer) - the real enemy of the digestive system.

Women damaging doses of alcohol are twice less than for men.

In our country, 80% of all liver diseases andpancreatic associated with taking alcoholic drinks. This is not surprising, since the minimum damaging dose leading to the development of liver disease, a total of 50 grams of ethanol per day. In the US, this dose is somehow less: there is a rule "seven drink per week" (one drink about 20 grams of ethanol).

Especially harmful use of large doses of strongalcohol in combination with fatty or fried foods. This may lead to acute alcoholic hepatitis, an acute exacerbation of chronic pancreatitis or.

As a rule, after the holiday dates observed the influx of visitors to the gastroenterologist.

2. Medications. It is no secret that regular intake of non-specificanti-inflammatory drugs (aspirin, analgin, etc.) may cause gastric mucosa and duodenal ulcers. Manufacturers of drugs mandatory warning about this in the instructions (when attached). If you are prescribed a new drug is unknown, certainly will question the doctor about side effects of it.

And now a terrible secret so as not to suffer stomach should not be taken Supplements with unspecified side effects. In addition, it should be very wary of traditional medicines. For example, we know many cases of toxic hepatitis after drinking hemlock.

3. Diets. It should be remembered that prolonged starvation leads to the formation of calculi (stones) in the gallbladder.

4. Travel. Gastrointestinal diseases such asIrritable bowel syndrome can be triggered by foodborne obtained in tourist trips, including for our country. Unfamiliar foods can cause a malfunction of the digestive system. For such cases, gastroenterologists coined the term "travelers' diarrhea".


When to see a doctor

If the error in the diet regularly begincause discomfort, then, with the digestive organs is not all right. So, the time has come. Symptoms of digestive problems: blunt abdominal pain, bloating, feeling of heaviness after eating, heartburn.

Unfortunately, most of our patientsseek help after years of senseless self. Whether doctors are afraid, they do not trust - you forget that in the court of XXI century, and not all illnesses are treated with activated carbon and baking soda.

There is no dispute, dieting (not spicy, fatty and fried) more will not hurt anyone, but it is best to be tested so as not to miss anything serious.

Symptoms of many gastrointestinal diseases are similar, so in our time the diagnosis is made only after a comprehensive survey.

Gastroscopy is perhaps one of the most unpleasantmedical diagnostic procedures. What's interesting is that women carry it much more resistant than men. Here you can advise only one thing: if you're not a woman, be patient, do not be nervous and do not pull up. It's unpleasant, but you have to endure.

By the 1980s, the development of diets reached a high degree of sophistication. Diet therapy known as the leading factor in treatment of many diseases of the digestive system. This was indeed the case.

The fact is that while drugs or could not take a long time due to numerous side effects or were not sufficiently effective.

In our days, when the drugs become more effective andsafer, the need to comply with a strict diet lost. However, during the exacerbation should preclude the use of spices, fruit, greasy, spicy, fried food. Errors in the diet (even medication) at this time can lead to relapse.

For example, your doctor has prescribed a diet long-term, and itsit is impossible to comply with, or (gasp!) happened birthday banquet-wedding-feast. What to do? In such cases, we allow our patients to expand the list of authorized products, but at the same time recommend taking enzyme preparations (for example, mezim, Creon) and sometimes proton pump blockers (omeprazole), to reduce the burden on the digestive organs.

And finally, the Helicobacter Pylori. Its destruction (eradication) leads tolong-term remission of gastritis or peptic ulcer disease, often lasting years. Not to mention the fact that the reduced risk of gastric tumors. So if you have found a gastritis or an ulcer - require the determination of Helicobacter Pylori, and if they find him - undergoing medical treatment.