Home>gastroenterology>Ulcer retreats, but does not give up

Ulcer retreats, but does not give up

Exacerbation of chronic ailments - neradostnyesign of the off-season. Especially hard in the autumn falls sick ulcer. Why ulcer makes itself felt in the autumn and both patients protect themselves from the attacks of the disease, says MD, Professor, Department of Hospital Therapy Medical University Igor Nikitin.

The mechanism of life of these bacteria to the endIt has not been studied. It is expected that, once in the stomach, Helicobacter begin to actively proliferate and eat away at the stomach lining. By the way, this microbe lives in the body, 80% of people. But it is not all suffer from peptic ulcer disease. For its occurrence need a number of additional factors.

Curious and interesting wants to meet ...

Intrigue stomach ulcers that she is looking for hisvictims among the young and affluent men - those who are keen and stress that absorb fast food in large quantities, and if not can replace lunch pack of cigarettes. Usually, they have no time to pay attention to the periodic dragging pain in the stomach. Meanwhile, the reception rude and spicy foods causes increased production of hydrochloric acid, the corrosive gastric mucosa. In combination with alcohol and nicotine, it has a truly devastating effect: nicotine increases the production of hydrochloric acid and interferes with normal digestion of food and alcohol enhances the aggressive properties of gastric juice.

Many scientists believe that the main triggermechanism of peptic ulcer - neuro-psychological factors. There were cases when under the influence of adverse factors of gastric juice eroded the stomach in just a few hours.

Do not miss the sight of

Pain in peptic ulcer quite characteristic. They have:

By the way, anorexic people with peptic ulcerdisease do not suffer - on the contrary, some during acute appetite increases. An important indicator of peptic ulcer - acid regurgitation and heartburn, which usually occurs after 2-3 hours after eating. Apart from the main stomach ulcer there is also a secondary symptoms. In the lady's finger, or periodontal disease often develops produced abundant deposits of tartar.

It has long been observed that patients with gastric ulcernoticeably lose weight. Often, problems with the digestive system begins for those who in childhood suffered frequent angina. The signal for diseases of the stomach and can serve as a constant nasal congestion. But worst of all, if the disease is asymptomatic. Then, at any time it can spread deep into the lining of the stomach - and there will be bleeding. And there, and to perforation - rupture of the stomach wall - a stone's throw. Therefore, when the first symptoms need to rush to the doctor.

Diagnosis ulcers nowadays is notdifficulties. The most effective method of diagnostics - endoscopy. The procedure unpleasant, but very informative - the inner walls of the stomach can be seen at a glance. During this procedure, usually taking a piece of tissue for biopsy.

There is no bad weather?

It has been observed that peptic ulcer disease is exacerbated by strictschedule - fall and spring. Why - many versions. Some say that at this time of changing the acidity of the stomach, the other - in the offseason that decreases the activity of the gastrointestinal tract. Today, many researchers noted that during the off-season greatly reduced the activity of the sympathetic-adrenal system. As a result, the mucosa becomes more susceptible to aggressive hydrochloric acid.

The raw time of the year is activated andhelikobakterialnaya infection. In addition, the fall is not usually enough vitamins in our diet B and C, required for updating the natural gastric mucosa.

Therefore, in order to survive the fallrelatively quiet, in patients with peptic ulcer disease must be balanced diet, rich in vitamins. It is also recommended as far as possible to avoid any stressful situations.

How to help your stomach?

Whatever time of year you caught any disease, itshould be treated. Typically, patients prescribed antibiotics - several drugs simultaneously. Also appointed antacids which neutralize gastric main component - hydrochloric acid, and forming a protective film on the surface of the gastric mucosa.

The patient gets better in 3-4 days, active treatment takes two weeks on average, but in complete healing of the ulcer takes six weeks. All this time, the patient must comply with the right diet. It is proved that there is no point torturing yourself pureedfood. Suffice it to number 1 diet consisting of cereals, mashed potatoes, noodles, boiled and stewed meat, boiled vegetables. On the sharp, spicy and fatty dishes, as well as the sweet pleasures such as tea, coffee, chocolate during the treatment will have to forget. It is important to remember that alcohol and nicotine will bring to naught all the efforts of doctors! 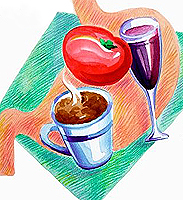 This commandment is important not only for physicians, but alsopatients. Self-medication with ulcers absolutely contraindicated! Well removes the twinge of a glass of milk with a pinch of baking soda. But keep in mind - so you can remove the pain attack, but it is not a cure.

Antacids - only an emergency measure. In addition, they distort the picture of the disease, causing a shortage of phosphorus in the body and contribute to constipation. Those who are willing to experiment with your stomach and take a variety of supplements and herbal teas, put themselves at great risk!

Alas, most likely, you are already in it. According to statistics, 95% of Russians have symptoms of chronic diseases of the gastrointestinal tract. And from peptic ulcer disease affects one in seven Russians, and the diagnosis "chronic gastritis" is one in three. Besides genetic predisposition clearly seen in the development of peptic ulcer disease. Not to mention the fact that you can pick up a malicious gelikobakter anywhere.

So try to at least do not complicate their position: