The main symptoms and treatment of Turner's syndrome-Shereshevskii

The concept of Turner syndrome-Shereshevskii

For the first time this hereditary disease has been described1925 N. Shereshevskii, who believed that it is caused by underdevelopment of sexual glands and pituitary gland and is combined with congenital inner development. In 1938, Turner singled characteristic triad of symptoms of the disease: sexual infantilism, the wing skin folds on the sides of the neck and elbow strain.

Clear communication of the syndromeTurner-Shereshevskii with age and any diseases of the parents is not revealed. However, pregnancy is usually complicated by toxicosis, threatened miscarriage and births are often premature and pathological. Features of pregnancy and childbirth, ending the birth of a child with Turner syndrome-Shereshevskii consequence of chromosomal fetal pathology. Disturbances of sexual glands in Turner syndrome-Shereshevskii due to the absence or structural defects of one sex chromosome (X chromosome). 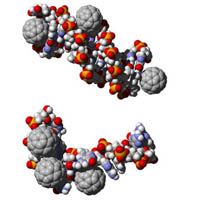 In primary embryonic germ cells are laidalmost the normal amount, but in the second half of pregnancy is their rapid involution (reverse development), and the time of birth the number of follicles in the ovary in comparison with the norm sharply reduced or they are completely absent. This leads to a pronounced lack of female sex hormones, sexual underdevelopment, the majority of patients - to primary amenorrhea (absence of menstruation) and infertility. Arisen chromosomal abnormalities are the cause of the malformations. It is also possible that concomitant mutations play a role in the appearance of malformations, as there are conditions similar to Turner syndrome-Shereshevskii, but without visible chromosomal aberrations and sexual underdevelopment.

In Turner syndrome usually gonadsare undifferentiated connective tissue bands that do not contain the elements of the gonads. Less common are the rudiments of ovarian and testicular elements, as well as vestiges of the vas deferens. Other pathological data consistent features of the manifestations of the disease. The most important changes in bones and joints - the shortening of the bone hands and feet, aplasia (absence) of the phalanges, wrist deformity, osteoporosis (destruction) of the vertebrae. There have heart diseases and large vessels (aortic coarctation, cleft arterial duct, cleft of the interventricular septum, the narrowing of the aorta), malformations of kidney development. Manifest recessive genes color blindness and other diseases.

The folds of the skin in the neck region - a characteristic symptom of the disease.

Backlog of patients with the syndromeTurner-Shereshevskii physical development is already noticeable at birth. Characteristic features of Turner syndrome-Shereshevskii at birth is the excess skin on the neck and other malformations, especially osteo-articular and cardiovascular systems, "the face of the sphinx" lymphostasis (lymph stagnation, clinically manifested by large edema). For the newborn is characterized by symptoms such as generalized anxiety, violation of the sucking reflex, regurgitation fountain, vomiting.

At an early age in some patients saydelayed speech and mental development, which indicates the development of the pathology of the nervous system. The most characteristic feature is a short stature. The growth of the patients does not exceed 135-145 cm, weight is often redundant.

Genital hypoplasia in the syndromeTurner-Shereshevskii different specific originality. Often signs are geroderma (pathological skin atrophy, resembling senile) and moshonkoobrazny appearance of the labia majora, high crotch, hypoplasia of the labia minora, the hymen and clitoris, a funnel-shaped entrance to the vagina. Breast cancer in the majority of patients are not developed, low nipples are located. Secondary body hair appears spontaneously and sometimes scarce. Uterus underdeveloped. Sex glands are not developed normally and presented connective tissue.

Intelligence in the majority of patients with Turner syndrome, Sheresheskogo virtually stored in the mental status of patients with a major role played by a kind of psychic infantilism with euphoria.

Diagnosis and treatment of diseases

Turner syndrome diagnosis based oncharacteristic clinical features, determining the sex chromatin (the substance of the cell nucleus) and karyotype (chromosome set). The differential diagnosis is carried out with dwarfism (dwarfism), which is held to exclude determination of the content of the pituitary hormones in the blood, especially gonadotropins.

In the first phase of stimulation therapy isgrowth of the body anabolic steroids and other anabolic agents. Treatment should be the minimum effective doses of anabolic steroids intermittently at regular gynecological control. The main view is the therapy of patients estrogenizatsiya (appointment of female sex hormones), which should be 14-16 years old. The treatment leads to body feminization, the development of female secondary sexual characteristics, improves trophic (feeding) of the genital tract, reduces the hyperactivity of the hypothalamic-pituitary system. Treatment should be for all patients of childbearing age.

Forecast for life with the syndromeTurner-Shereshevskii favorable, with the exception of patients with severe congenital heart disease and major vascular and renal hypertension. Treatment of female sexual hormones make patients able to family life, but the vast majority of them are infertile.