Neurofibromatosis - has not been fully studieddisease. So, today the radical treatment of this disease does not exist. But something about the ailments of modern medicine still knows. What is it - answer the author of this article.

Neurofibromatosis type I - a serious systemichereditary disease with a primary lesion of the skin and the nervous system, one of the most common monogenic diseases in humans, occurring with a frequency of at least 1: 3000 - 1: 4000 of the population.

The disease is caused by mutations in the gene called "NF1" in 17q-chromosome. Men and women are affected equally often. Approximately half of the cases - a result of new mutations.

The disease is characterized by progressivecurrent, high rate of complications, including leading to death (the development of cardio-respiratory failure due to pronounced skeletal abnormalities, malignant degeneration of neurofibromas (nerve tumors), and others.).

The mechanism of development of clinical manifestations is unknown. There is an assumption that "nf 1" gene is part of a group of genes that suppress tumor growth.

On the development of neurofibromas, little is known. From time to time their growing number and size in response to different stimuli, among which occupy a leading position:

On the treatment of neurofibromatosis 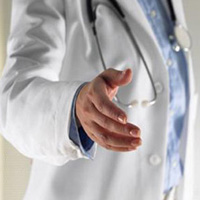 With the expansion of the range of offered businessmedical and cosmetic services the number of appeals patients increased significantly, pointing to the emergence of new tumors (neurofibromas, neuromas, schwannomas) after the so-called iatrogenic interventions. It is the removal of tumors for diagnostic or therapeutic purposes by various methods, including a surgical excision.

Complications can also result in the appointment ofphysiotherapy in the treatment of various somatic diseases, correction of skeletal disorders (all kinds of scoliosis, fractures) and neuromuscular disorders (often massage on various occasions assigned to infants, when the diagnosis of neurofibromatosis type I is often impossible iz-za insufficiency of clinical manifestations). But often the disease progresses and the background of the seeming well-being. The situation is complicated by the fact that the doctors do not have the ability to suspend the development of the disease.

The main objective of researchis to develop methods of pathogenetic treatment of neurofibromatosis type I, allowing to contain the emergence of new and growth of existing tumors and to prevent the development of complications.

Currently, treatment of this disease,both abroad and methods used in Russia symptomatic therapy, such as surgical removal of tumors or kyphoscoliosis correction neurofibromas radiotherapy of internal organs. Furthermore, Western scientists have focused on the possibility of etiologic treatment, i.e. genetic engineering. Especially far this trend has progressed since the discovery of the mutant gene and decrypt its primary product - neyrofibromina in 1990; on scientific research related to this problem, the huge funds are allocated annually.