Home>Gynecology>Delayed menstruation - why it happens?

Delayed menstruation - why it happens?

Obstetricians are often faced with a complainton "delay menstruation." In this case, the patient having anxiety and legitimate questions, "Is everything okay? Did I not pregnant? Whether there is in others? Am I healthy? "Let's talk about the causes of this condition, which may be different.

Menstrual cycle - is the monthly changethe female body, which occur under the influence of sex hormones. The main feature of the normal cycle (its duration is 21-35 days) are considered regular menstruation - bleeding from the genital organs, the duration of which is normally 3-7 days.

Normal blood loss does not exceed 50-100 ml during menstruation.

Since all levels of the system are interconnected,the next menstruation delay may be due to the disruption of any of these links. Therefore, the reason for the delay menstruation can be a "failure" at any level of the menstrual cycle regulation.

The reason for the delay number 1. Polycystic ovary

Delayed menstruation can be caused byvarious gynecological diseases, such as inflammation of the uterus (salpingo), fibroids (benign tumor) of the uterus, and others. However, it should be noted that in these diseases often observed bleeding from the uterus.

Periodic delays menstruation characteristic ofdiseases such as polycystic ovary syndrome (PCOS). Under this concept combines a number of disease processes, in which impaired production of hormones. In this case, the body does not ovulate (release of an egg from the ovary) and infertility arises.

PCOS occurs in violation of the functions of variousorgans: hypothalamus, pituitary, adrenal, thyroid and ovaries themselves. Therefore, the disease can manifest itself in different ways depending on its causes, and the diagnosis is not sufficient to use any one characteristic or diagnostic method.

In polycystic ovaries most frequentlythere are menstrual irregularities (usually - a delay of a few days to a few months), excessive hair growth on the body, increasing the size of the ovaries (but not always), half of the patients - obesity.

In the measurement of basal body temperature (in a straight linecolon), it remains approximately constant over the cycle, rather than an increase in the second half as normal. In the most severe (primary) form of the disease, these symptoms appear as a teenager after the onset of menstruation.

To treat this condition designate differenthormonal preparations, used tools that reduce the level of male sex hormones (the formation of which is increased in this disease) regulating the metabolic processes in the brain and other structures.

If there is absolutely necessary to decrease obesity body weight. In preparation for the planned pregnancy is an important stage of the treatment consists in stimulation of ovulation - release of the egg from the ovary.

For drugs that are used, andwhen the ineffectiveness of using surgical methods of treatment. Currently, it is carried out by laparoscopy: in the anterior abdominal wall make a small hole through which the injected optical instruments for examination of the abdomen and surgical instruments.

The reason for the delay number 2. Abortion

Delayed menstruation can also occur afterabortion. The reason is hormonal imbalance, and that during the scraping tool uterus may be an excessive amount of tissue removed, including that portion of the inner lining of the uterus which normally increases during the menstrual cycle and is excreted as menstrual blood.

To restore this functional layeroften it requires slightly more time than during a normal cycle. That is, after abortion menstruation can occur not through 28-32 days, and 40 days or more. Such a delay is not normal: women need examination and treatment.

The reason for the delay number 3. Receiving oral contraceptives

The reason for the delay of menstruation may be receivingoral contraceptives. During the administration of the drug or after its cancellation for several menstrual cycles, absence of menstruation can be observed: the so-called gipertormozheniya ovary syndrome.

With the development of ovarian syndrome gipertormozheniyaoral contraceptives overturned. As a rule, within 2-3 months, maximum - within 6 months after the end of their reception of ovarian function is restored. If the absence of menstruation persists over a long time, appoint agents, stimulating work of the pituitary, or drugs that stimulate egg maturation and its exit from the ovary. Prior to the restoration of normal menstrual function should use other methods of contraception.

The reason for the delay number 4. Stress

Stress - long or short strong -It is the cause of a malfunction of the central structures (cerebral cortex, hypothalamus) regulating the ovaries and uterus. An example of such disorders is the so-called amenorrhea wartime, when under stress in women stop menstruating.

The reason for the delay number 5. Weight Loss 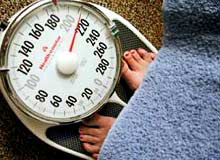 Another cause of significant delaymenstruation can become a significant and rapid weight loss. Doctors there such a thing as menstrual critical mass - is the weight, which in the presence of adolescent girls tend to start menstruating. However, we are more interested in the fact that with a strong desire to lose weight, reaching this critical mass of menstruation (45-47 kg), a woman can obtain not only the desired result, but also a long delay menstruation.

Most often, this effect occurs when the nervousanorexia - Eating disorders characterized by refusal of food intake and / or its rejection. This disorder is accompanied by the work of the regulatory systems of the body, the nervous and endocrine. Anorexia nervosa is characterized by a sharp decline in production of pituitary hormones that regulate including the ovaries.

This reproductive disorders shouldregarded as a defensive response in a nutritional deficiency and mental exertion. So to restore the age-secretion of hormones required to achieve an ideal body weight and the elimination of mental stress.

Anorexia nervosa in 50% of cases can occurwith episodes of bulimia (binge eating), after which the patient are particularly clear signs of anxiety, depression and remorse, successful attempt to induce vomiting.

For this reason, preparing for pregnancy, do not try to reach the "90 - 60 - 90" ideal. If you plan to lose weight, take it wisely, and it is better - to consult a dietitian.

The reason for the delay number 6. Pregnancy

Pregnancy - is, fortunately, the most common andPhysiology is the reason for the delay menstruation in women of reproductive age. In this case, the monthly delay may be accompanied by symptoms such as a change in the taste and olfactory sensations, roughness, breast tenderness.

Typically, a pregnancy test, in this caseIt gives a positive result. Delayed menstruation occurs and ectopic pregnancy, when the fertilized egg attaches to the uterine tube. Thus all subjective sensations characteristic of pregnancy can also be present.

What can a doctor?

If the menstrual cycle is necessary to consult a doctor immediately. Inspection obstetrician will eliminate conditions that require immediate surgical intervention.