Home>Gynecology>The omission of the uterus and vagina. How to solve a problem?

The omission of the uterus and vagina. How to solve a problem?

As if women do not protect themselves from severephysical work, the chance to "earn" the omission of the uterus and vagina, in a scientific way, "prolapse", they have always been. We want to talk about the problem, why it occurs, what threatens the uterus prolapse and how to treat genital prolapse. 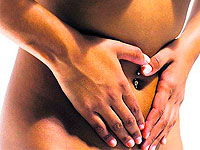 The omission of the uterus and vagina - painfulgynecological problem related to older women, but often affects young. The immediate "culprit" prolapse is considered part of increased intra-abdominal pressure that occurs when heavy physical labor, chronic cough, constipation. However, a healthy young woman, these factorsunlikely to cause displacement of the internal genital organs. The basis for the disease becomes weak and damaged ligaments uterine device and the pelvic floor muscles, resulting traumatic birth, disorders of blood circulation in the pelvic organs and reduce the influence of estrogen at menopause.

The uterus is located in the center of the pelvis, isin limbo and is held via ligaments, but it is easily shifted to the side, up and down. The mobility allows the uterus to perform its function during pregnancy and childbirth, without affecting the bowel and bladder, which are located in the immediate vicinity.

A further pillar of the uterus is the pelvic floor muscles, they limit the mobility of the body, not allowing the move below a certain level.

uterine prolapse develops gradually,holding unit uterus slowly losing ground and the body falls first to the level of the genital slit, and then bulges out and falls, forming a hernia of the pelvic floor.

omission of the uterus while asymptomatic, but then impact on the state of women causing the sensation of a foreign body in the vagina,heaviness and pain in the abdomen, lower back and sacrum. Displacement of the uterus disrupts the bladder, causing urinary incontinence and making it difficult bowel movements.

These symptoms dramatically reduce the quality of life of women and often forced her to shun people and refuse to work.

Prolonged existence of prolapse leads to disruption of blood circulation and lymph flow in the genital area, in the neckuterine and vaginal walls are formed sores. Dropping out of the genital slit wall of the vagina are irritated and injured by contact with clothing and leaking urine, infected and inflamed, there is the threat of cancer. Urinary incontinence leads to the development of cystitis and pyelonephritis, renal work.

Omission of the uterus: how to treat?

It is believed that prolapse of the first degree may well be cured by conservative methods. Therapeutic exercises, intimate gymnastics,dieting, weight lifting restriction to 3 kg and the abandonment of sport can bring back the muscles of the pelvic floor and vaginal former strength and to provide "decent" support the pelvic organs.

A radical way to solve the problems of women,suffering prolapse or prolapse of the vagina and uterus of the second degree, it is surgery. Undoubtedly, for a young, full of strength a woman - is the right choice. Modern methods of surgical treatment of prolapse provide practically lifelong effect and allow a woman to have children in the future. In the course of operations to solve other problems, for example, removed ovarian cysts and fibroids. After treatment, the woman continues to live a normal life, but with the restriction of heavy lifting.

Surgical treatment of prolapse in women older age group, and they are the majority among patients with a similar problem, encounters some difficulties. The older the woman, the greater her comorbidity, which does not allow the operation. Sometimes women themselves refuse such treatment, because for them it is a serious step towards the unknown.

Unfortunately, until recently gynecologists oftenWe met at the reception of patients, who were forced to use the means at hand to maintain the uterus falling out. In such cases, always had to deal with severe trophic ulcers of the cervix and vagina, is complicated by prolapse.

In the arsenal of physicians among the means forConservative treatment of uterine prolapse and loss were primitive pessaries, which gives women a lot of anxiety and forced her to give up the treatment at all.

Over the years, scientific research has been invented more than 200kinds of pessaries, in practice, there are about 20, and this amount is sufficient for the most efficient solution to the problem of genital prolapse in the absence of surgical treatment options. According to the statistical research 94% of the pessary can eliminate symptoms descent and prolapse of the uterus and vagina, as well as to eliminate urinary incontinence.

Over 79% of women who used a pessaryDuring the year, satisfied with the result and continue on treatment. On what are pessaries, to whom and when they can help, contraindications of this treatment you can learn from the article "Gynecologic pessary - to keep the uterus".