All of the tick-borne encephalitis

There was a tick hunting time (April to September). If you love camping, going for a vacation, then the knowledge of the tick-borne encephalitis are very useful.

Tick-borne encephalitis occurs after the tick bite. It is a viral infection, characterized by lesions of the central nervous system. More severe, deadly. Ticks - carriers of the disease are living on the territory of Russia, in the forest and steppe zones, but those that carry encephalitis, found only in certain areas. Tick-borne Encephalitis is most prevalent in Kostroma, Tver, Yaroslavl, Arkhangelsk, Vologda, Kaliningrad, Leningrad, Kirov, Sverdlovsk, Tyumen, Chelyabinsk, Novosibirsk, the Baltic region and some other areas.

Habitats Tick-borne Encephalitis - a littleshaded and moist deciduous or mixed forests with thick grass. Many ticks that carry encephalitis, found on forest edges and paths, overgrown grass on roadsides.

The tick attaches itself to a person in those places wheremore delicate skin - in the neck, head, armpits, on the inside of the thigh, etc. If a carrier has been tick encephalitis, the first symptoms begin to appear after a week, three weeks is possible..

The symptoms of tick-borne encephalitis 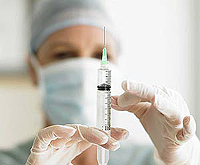 When the bite of the tick-borne Encephalitis symptomsdisease appear suddenly. The disease begins with chills, a sharp increase in body temperature to 39 degrees. There severe headache, pain throughout the body, weakness, and nausea. At 3-5 days after the first symptoms begin to show signs of damage to the nervous system: convulsions, the patient is delirious, disturbed coordination of movements. If the disease is left untreated the person can die.

Once the tick is found, it should be removed. This can be a thread or with tweezers, grasping the tick as close to the skin and swing it from side to side. This should be done carefully, so that the insect head did not go under the skin.

If unable to pull mite entire head and left, it is necessary to pull the needle through. Then treat the wound by any alcoholic solution.

As is known, ticks - carriers of tick-borneencephalitis. Therefore, in the case of a tick bite, to prevent development of the disease, need emergency medical care. The victim must enter the immunoglobulin against tick-borne encephalitis. This will reduce the likelihood of infection. This emergency prevention can be carried out during the first three days after the bite. The victim must be on the examination to the belief that there is no threat to his health.

Against tick-borne encephalitis can be donevaccinated. This is especially necessary for those who live in areas endemic for tick-borne encephalitis, and those who are going to go to unfamiliar endemic areas. vaccination course consists of 3 vaccinations, and should be carried out at certain times - in November, one month and three months later. Last vaccine administered no later than 2 weeks prior to the activity of ticks. However, if an unscheduled trip to endemic areas, it is possible to pass an emergency vaccination course.

In Moscow, the vaccination can be done in the municipalclinic or specialized centers. The cost of grafting depends on how it is carried out a preparation. On average, the vaccine preparations for the entire course cost from 400 to 1000 rubles. However, the cost of vaccination encephalitis may vary considerably - depending on whether the vaccine whose production used. If you go to a private clinic for a vaccination, please note the following points.

Vaccination should be carried out in a specialthe treatment room. The procedure is performed under the supervision of a physician nurse. Note whether there is a separate office box protivoshokoy drug therapy. The preparation of the vaccine is administered immediately after opening the ampoule. On the ampoule must be clearly visible production time, the name of the liquid vial should not be precipitate. The drug is administered intramuscularly. Graftable should be under the supervision of medical staff 30 minutes.

After the introduction of vaccination may be differentthe body's reaction. This reaction may be in the form of immediate allergy. The reaction may be that last up to 5 days. Perhaps redness, swelling, fever up to 38 degrees. There may be headache, weakness, pain in muscles and joints. If the reaction to the vaccine against tick-borne encephalitis long runs, you should see a doctor.

There are contraindications forvaccination. Various acute and chronic diseases, and pregnancy. Ability to vaccination in each case determined by the physician. He and is responsible for the correct purpose of vaccination.

However, we should not forget that the vaccination againstTick-borne encephalitis is able to really protect about 95% of vaccinees. It does not protect against the bite of the tick-borne Encephalitis. But in case of the disease in vaccinated people it flows more easily and with fewer complications.

Also inoculation can protect yourself from tick-borneencephalitis and other methods. If the expected hike in the woods you need to dress was long-sleeved, buttoned collar should, trousers tucked into boots, headgear is desired. Just before the campaign can be reserved with special sprays or ointments which should deter ticks. Since mites live mainly in the bushes, in the tall grass, - better to avoid such places. Upon returning home, you need to examine your body, clothes for the presence of insects.

Fortunately in Moscow and Moscow region encephalitictick is not found. But a lot of people who bring with them the disease. Close to the Moscow area located where encephalitis mites are common. It Tver, Yaroslavl, Kostroma, Ivanovo, Kirov, Leningrad and many other areas.

However, in Moscow and the Moscow region ticks are dangerousthat can transmit borreliosis. The incidence of this disease in a small number are recorded every year. So tick - the insect, though small, but dangerous.