Herpetic infection genitals refersto diseases that are transmitted sexually. Most often it is caused by the herpes simplex virus of the second type. The manifestations of herpes infection of the genitals can be both acute and erased character.

Herpetic infection of genitals oftencaused by herpes simplex virus of the second type. There is a first type of herpes virus, but its "targets" are the mucous membranes of the lips, eyes, nose, and human skin. These two viruses are able to exist simultaneously in the body. Often, in the beginning there is the first type of virus infection and the appearance of symptoms of the disease on the face. If in the future become infected with the virus and the second type appears genital herpes, the first manifestation is usually weakened. Sometimes it is possible primary infection of genital herpes herpes infection in the absence of the first type. There were even cases where sexual organs disease caused both types of viruses.

The virus of genital herpes often foundyoung women sexually active. Infection with the herpes virus does not always cause disease with typical manifestations. Sometimes the disease is hidden without striking manifestations. The carrier of the virus can be both a man and a woman. This is especially dangerous diseases. The man, not knowing that he is ill, continues to infect healthy people. In the life of a woman with herpes simplex virus disease of the genital tract can be fatal. The fact that infected women during pregnancy, there is a great risk IUFD. According to experts, 50-70% of children die without being born. The herpes virus can cause numerous malformations of the fetus, the development of his infection and lesions of various organs are often not compatible with life. In very mild cases, children are born very small and weak. Often there is an infection of newborns virus of genital herpes during childbirth, during the passage of the birth mother's ways.

The manifestations of herpes infection 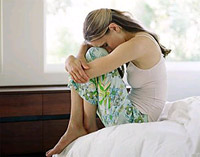 The manifestations of herpes infection of the genitalsThey can be both acute and erased character. The acute form is characterized by a severe, prolonged course and the presence of pronounced manifestations of the disease. The incubation period, ie the time when there is a latent virus accumulation in the body, is usually 3-7 days. The forerunners of occurrence of herpes symptoms can be itching, tingling, burning sensation in the vulva. Some patients have symptoms and common diseases, such as drowsiness, irritability, headache, depressed mood, decreased performance. These are signs of involvement in the infectious process of nervous tissue and general poisoning of the body products causative agent activity. All manifestations of the nervous system due to the fact that the virus enters the bloodstream and spreads throughout the body. He "settles" in ganglia located near the spine in the lumbar and sacral. That is the herpes virus stays in the body for a lifetime, periodically causing an exacerbation of the disease. Located in the nerve tissue of herpes simplex virus is not available for the majority of modern drugs, poet cure herpes is not currently possible. Exacerbation of the disease contribute to hypothermia, common infections and other diseases that cause low immunity, sexual intercourse, fatigue and stress.

So, 3-7 days after infection with the virusherpes, the first manifestations of the disease appear on the genitals of a woman. The most typical sites of infection with the virus are the vulva, vagina and cervix. Small vesicles 2-3 mm in size appear in the vulvar area, filled with a turbid liquid. Bubbles are arranged in groups up to 2.5 cm in size. Gradually, the bubbles open and in their place appear irregularly shaped sores, covered with a yellowish coating. They heal within 2-4 weeks without leaving scars. All these manifestations are accompanied by itching, burning, pain in the external genital area, which intensifies with urination, sexual intercourse and during movement. Rashes in the form of vesicles also appear in the vagina, and they undergo the same stages of development as in the vulva. A woman is troubled by muddy mucous discharge. Damage to the cervix and its canal can be accompanied by heaviness in the lower abdomen. When ulcers heal, all these worries disappear, and a period of calm sets in. The virus is not excreted, but remains to live in the nervous tissue.

In the future, the aggravation of the disease canoccur depending on the severity of once every 2-3 years to monthly outbreaks. If you still have the disease appears less pronounced. The reactions of the nervous system often is not observed, and anxiety occur only in the genital area.

Diagnosis of herpes infection shouldconducted necessarily complex. Given that the symptoms of the disease can be similar to the picture in syphilis and other infections of the genital organs, appoint a woman to study these diseases: strokes and crop discharge from the vagina, cervix, blood tests for syphilis and HIV. There are also methods of blood testing and discharge from the genitals directly on the herpes simplex virus. Complementing the colposcopy diagnosis, allowing to see clearly symptoms of genital herpes.

Treatment of HSV infections of genitalsIt is a challenge, due to the carriage of the virus for life in the body. Generally, treatment is complex, long and includes compulsory abstinence from sexual intercourse. Assign:

In addition, at a time when no signs of acute herpes infection, vaccination is possible antiherpetic vaccine.