To catch this illness like encephalitis orLyme disease can not only during a walk in the forest, but simply by drinking raw milk home. On what else there are ways of infection, as well as about what ticks are dangerous, read this article. 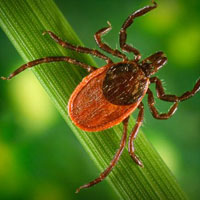 Outside the window - just like in the picture: bright sun and clear blue sky. In short, a lovely spring day. And, of course, draws on his favorite dacha or in the woods, away from the bustle of the city and gassed. However, it is not necessary to go somewhere out of town quite a walk in the nearby park or square, the come to feel the beauty of the season.

However, be careful: together with the warm sunlight again comes the season of ticks. The tick attaches itself seamlessly and painlessly for the selected object. Bite it is not felt because they released saliva contains anesthetic agents, and the skin at this moment loses its sensitivity. What places chooses to "attack" creeping parasite? More often than not - the scalp, neck, but it can seamlessly move to other areas of the body.

What ticks are dangerous? The fact that they are the carrier of serious infectious diseases, bacteria and viruses while preserving their body in a few years. Among these diseases - the spring-summer encephalitis and borreliosis, or Lyme disease (it was first detected in the US city of Lime, hence its name).

What is more dangerous mites? And that can infect not only humans, but also a pet, which in some cases is able to infect humans. If, say, you drank raw milk rustic, and it has a virus encephalitis. Incidentally, due to the thick coat hardest to detect mites in goats. Is no coincidence that their milk is more often infected.

Now about encephalitis. It usually starts as a flu - with a little fever, headache, aches in the joints. But then the temperature rises, increasing headache, vomiting occurs. The disease affects the nervous system and primarily brain possible paralysis, epilepsy and even death. And the older the person, the more dangerous the forecast. Therefore, in no case can not hesitate to call the doctor. In cases of doubt, laboratory diagnosis of tick-borne encephalitis can be carried out.

No less dangerous and borreliosis. Symptoms of it are as follows: the victim's temperature rises, he feels lethargy and pain in the joints, the skin at the site of the bite appears annular erythema. In this disease, impaired activity of the nervous and cardiovascular systems, as well as the musculoskeletal system.

To repel the attacks of ticks


Secure the occurrence of tick-bornespring-summer encephalitis vaccine can. It helps in 90% of cases, and is recommended primarily for those who are often in the woods, parks, fields or living in areas of particularly high concentration of mites. Of course, there for her and contraindications. Therefore, check with your doctor. Vaccinations against borreliosis yet, but this disease can be successfully treated with antibiotics.

As far as the most dangerous in terms ofregions of infections, it is primarily the Far East, Siberia and the Urals. In central Russia the disease is most often seen in Pskov, Novgorod, Yaroslavl, Tver regions, and also in some areas of the Moscow region, for example in Orekhovo-Zuevo, Taldom, Ramenskoye and some others. However, it is unsafe and metropolitan parks, as here, there are ticks. Therefore, walking here without a hat, stay away from trees and shrubs.

How to protect yourself from ticks? First of all, you need to follow a simple rule: going to the country, in the woods or on a camping trip, be sure to wear a hat or tie a head scarf. It should also be easy to close the neck scarf, shirt, tuck into pants, and the last - in socks. It is advisable to wear boots or high boots. And again, the mites are well deter various repellents, which are sold in a pharmacy. Do not be lazy to put means in the open areas of the body, clothing and bags. Returning from a trip home country, carefully inspect your body and clothes. If you find a tick, first disinfect the place where he has stuck, alcohol or vodka, and then try to remove it with tweezers or small tweezers. In this bloodsucker must be securely captured and pulled from under the skin. If it remains the proboscis, try to pull it disinfected needle, like a splinter. Then it is necessary to lubricate the wound with iodine or brilliant green. And in any case consult a doctor might need his help.