How to protect against influenza and SARS

Many believe that the influenza vaccine -hundred percent guarantee. Alas, it is not. Whatever may be the effective vaccine, there are many other viruses that are dangerous to the body. We are talking about SARS pathogens. 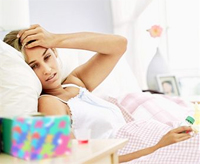 When the sky is occupied leaden clouds, and we are anxiously watching the fall of the column street thermometer, it's time to think about their health.

The World Health Organization has calledsubtypes of influenza viruses that can cause epidemic season 2011-2012 years. The most dangerous of them is already known strain of A / H1N1, associated with the outbreak of "swine flu" in 2009. And although the epidemic is still far (usually its origin is in the middle of winter), to the developments on the prosperous scenario, the Federal Service recommends get vaccinated.

Many believe that the vaccine - a wholly-ownedguarantee. Alas, it is not. Although vaccination is most often prevents infection, the risk of the flu still remains, but zabolsevanie usually been mild, with no severe complications or death. In addition, vaccination with cell-mediated immunity is formed as recovering from illness. But it is important to note that the vaccinated person is protected against influenza for a period of not more than 12 months, and was on the subtype of the virus against which the vaccine was given. After this period, the level of antibodies formed as a result of vaccine falls below required for effective protection.

If possible, you should try to get vaccinatedflu time, prior to seasonal increase morbidity, as the body takes time (typically at least two weeks) in the immune response. And if you move before vaccination serious illness, in this case it is best to consult a doctor.

Whatever may be the effective vaccine against typesinfluenza, active in the current season, there are many other viruses that are dangerous to the body. We are talking about SARS pathogens. From their influenza vaccination will not help.

Do not help and loved by many antibiotics - the viruses that cause influenza and SARS are not bacteria, and antibiotics do not work on them. Moreover, they may harm the organism.

So the treatment should follow the principle: each disease - his medicine. To combat viral infections such as influenza and SARS, there are special antiviral drugs. Some of these funds are active with respect to a limited number of infections, but there are those whose effectiveness is proven against a large number of varieties of influenza virus and SARS. One such drug is Arbidol®.

The peculiarity of the national antiviral drug Arbidol® in that it blocks the ability of the virusinfect healthy cells. This means that the influenza virus can not be reproduced and distributed on the human body. Obviously, it is best to start taking Arbidola® at the first sign of the disease, but evenIf the flu or SARS has "turned" in full force, the drug may reduce the duration of the disease, alleviate the symptoms and reduce the likelihood of complications.

Arbidol® perfect for disease prevention. In dangerous times of epidemic, he will support the body's defenses, helping them to cope with the "attack" viruses. Thus the preparation has good safety profile, side reactions occur infrequently and primarily in connection with its individual intolerance components.

Vaccination, antivirals, ortraditional methods - so many resources that can help you successfully resist viruses of influenza and SARS. What to choose - to decide, of course, you. But always remember the wonderful Russian saying: "road spoon for lunch." Protect your body correctly, efficiently and on time.