renal amyloidosis, what is it?

The concept of renal amyloidosis

Amyloidosis - in most cases the systema disease which is based on changes that lead to the precipitation of extracellular amyloid in tissue (is a complex protein-polysaccharide complex), which causes eventually organ dysfunction.

Fibrillar protein amyloid in some cases hasa number of properties, brings him to the immunoglobulins in others - not possessing these properties has the antigenic agent with whey protein, which is considered a precursor of amyloid.

Amyloidosis of the kidneys - a common manifestation of amyloidosis. Amyloid in this organ is usually deposited in the main membrane.

The causes and mechanism of development of renal amyloidosis

The causes and mechanisms of development of renal amyloidosisunknown. Typically, this condition is associated with the presence in the body of chronic infections (tuberculosis, syphilis) or suppurative reaction (osteomyelitis, pulmonary suppuration). This so-called secondary amyloidosis.

Although the causes and mechanisms of developmentthe pre-emptive destruction of some organs (kidneys, intestines, skin, etc.) for different variants of amyloidosis remain unclear, yet there is evidence to identify the units of this complex disease. By the conditions conducive to the emergence and development of amyloidosis include Dysproteinemia reflecting twisted protein-synthetic function and immunological changes related primarily cellular immune system (inhibition of the T-system, phagocytosis, and so changes. N.).

The main symptoms of renal amyloidosis 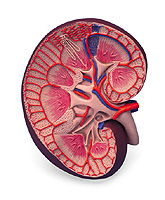 Symptoms and course of amyloidosis are varied andIt depends on the localization of amyloid deposits, the degree of their prevalence in the organs, duration of disease, presence of complications. Kidney damage is typical not only for the most common form of secondary amyloidosis, but also in the primary, including hereditary amyloidosis.

Patients with renal amyloidosis long time do not showany complaints, and only the appearance of edema, their distribution, increasing general weakness, a sharp decline in activity, the development of renal failure, hypertension, associated complications (eg, thrombosis of renal veins with pain and anuria) make patients seek medical attention. Sometimes there is diarrhea.

The most important symptom of renal amyloidosis - proteinuria(Protein in urine). It develops in all its forms, but is most common in secondary amyloidosis. The urine per day is allocated to 40 grams of protein, which make up the bulk of the albumin. Normally, protein in the urine is absent. Continuous loss of protein by the kidneys leads to hypoproteinemia (low blood protein concentration) and its corollary, edema syndrome.

When amyloidosis swelling acquire commoncharacter and stored in the terminal stage of uremia. Dysproteinemia is also seen a significant increase in erythrocyte sedimentation rate and changes in sediment samples. In marked amyloidosis occurs hyperlipidemia (increased levels of lipids in the blood) due to an increase in blood levels of cholesterol and fatty acids. Combining massive proteinuria, hypoproteinemia, hypercholesterolemia and edema (classic nephrotic syndrome) typical for primary amyloidosis with renal impairment.

In urinalysis, besides protein detected in the precipitate cylinders, erythrocytes and leukocytes.

Among other manifestations of amyloidosis observeddisorders of the cardiovascular system (primarily in the form of hypotension, hypertension rarely, various conduction disturbances and heart rhythm, heart failure), as well as the gastrointestinal tract (malabsorption syndrome). Often there is an increase in liver and spleen, sometimes without obvious signs of altering their function.

The emergence and progression of proteinuria, themore occurrence of nephrotic syndrome or renal failure with signs of the disease, in which may develop amyloidosis, are of paramount importance for the diagnosis. But of amyloidosis should think and in the absence of indications of a disease, especially when remains unclear cause of renal pathology.

The method of ensuring accurate diagnosisamyloidosis is currently organ biopsy, the most reliable - kidney, but also the mucosa of the rectum, less gum tissue, skin, liver. Morphological confirmation is necessary in all cases when a thorough study of history, including the family, the clinical manifestations and laboratory findings make it probable diagnosis of amyloidosis.

Treatment of (specific) amyloidosis notIt developed, due to the lack of the final ideas about the causes and mechanisms of this disease. For the forecast is set to active treatment for the disease, which led to the development of amyloidosis. Patients with amyloidosis shows a long (1.5-2 years) receiving raw liver (100-120 g / day).

In the initial stages of the process prescribed drugs4-amino-quinoline series (delagil 0.25 1 g once a day for a long time under the control of blood tests, as there may be a decrease in white blood cell count). Need an ophthalmologist and control - perhaps the deposition of derivatives of the drug in the eye refractive media.

The question of the appropriateness ofcorticosteroids and cytotoxic drugs is not completely resolved. Amyloidosis should be considered as soon as a contraindication to treatment with these drugs, the introduction of applied rates of 5% solution unitiola 5-10 ml / m (30-40 days). The possibility of the use of colchicine. The amount is determined by the severity of symptomatic therapy of certain manifestations (diuretic with significant hydropic syndrome, antihypertensives in the presence of hypertension and so on. D.). Ability to use hemodialysis and kidney transplantation in end-stage renal failure in amyloidosis is studied.