What is cachexia? What are the causes of cachexia? How to treat cachexia? The answers to these questions can be found in the article.

Cachexia occurs in almost allcancers, but most often, successively in order of importance - for cancer of the stomach, pancreas, colon, prostate, lung, breast, Hodgkin's lymphoma and various sarcomas. 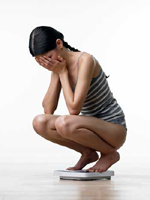 Cancer cachexia is characterized by intensedepletion of adipose tissue, muscle and visceral proteins, which reduces the energy reserves. This condition is accompanied by a significant decrease in the catabolism of body weight.

The main causes of weight loss in cancer patients:

The main medicinal agents, excitatoryappearance of appetite, are bitter, commonly derived from plants in the form of herbal medicines (herbal wormwood, centaury and oregano leaf trefoil) or in the form of so-called watering charges, and flavoring agents (herbs) which have no noticeable side (irritant) action. Bitterness usually take 10-15 minutes before eating. By flavoring agents include cumin, mint, ginger, cinnamon, cloves, vanilla, nutmeg, different varieties of pepper and mustard.