Drinking alcohol before bedtime leads many people drowsy, but it turns out, this leads to a breach of good rest at night. 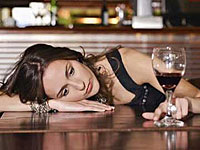 Until now, the impact of this "depressive effect" on this or that floor almost has not been studied. However, a group of scientists from the University of Michigan recently conducted a study in which it was found out, that women who consumed alcohol before going to sleep, sleep less and wake up more often for longer periods than menWho also had a few drinks of alcohol. More detailed results of the study can be found in the online journal "Alcoholism: Clinical and Experimental Research» (Alcoholism: Clinical & Experimental Research).

The study involved the observation of sleep in 93healthy adults. 59 women and 34 men were drinking alcohol before going to bed or to stages of intoxication, or just a soft drink. Among the group was 29 participants in the study who have a family history included a hereditary disease, like alcoholism. Drinks were distributed to research participants with half 9 and 10 pm. After that, their sleep was observed from 11 pm to 7 am.

Study leader, Dr. psychiatry andNeurology University of Michigan Todd Arnedt said: "Alcohol increased sleepiness and disrupted sleep quality greater in women than in men and the morning indicators of alcohol were worse than indicators after placebo" application He also drew attention to the fact that sleep quality was the same.. participants who drank alcohol and those with alcoholism in the family was a hereditary disease.

On average, women who used alcohol,We slept 20 minutes less than those who did not drink. This is roughly equivalent to a loss of 4% Sleep 8 hours. Arnedt explained that gender differences affect the absorption of alcohol. Compared with men, the concentration of exhaled alcohol in women who took it, has low performance. He added that the "maximum rate of alcohol concentration in this study was equal in both sexes. This means that the findings are not due to higher rates of concentration of alcohol among women participating in the study. He also believes that the performance difference is not connected with the experience of drinking alcohol, which was the same for the participants. " 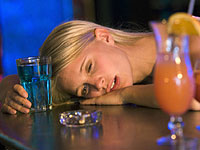 The most recent results of the study are a confirmation of the data from the previous studies. Namely: high dose of alcohol contributes to sleep in the early hours of rest, however, it has a negative effect in the form of sleep disturbances in the subsequent hours. Arnedt confirms that the results of the studysex differences "may be useful for future work in the field of quality of sleep and the risk of health problems associated with alcohol. As well as the study, which evaluated the ratio of the quality of sleep to relapse among those who have ties with alcohol. "