The author of this article shares his personal experience in overcoming such an ailment as discirculatory encephalopathy.


It never rains but it pours 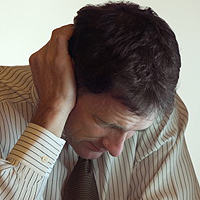 About six months ago my brother Antonhas become a headache frequently, he began to complain of forgetfulness incredibly evolved, it has become difficult to concentrate at work. In addition, it became apparent irritability. Recently, I finally made it to be examined in the clinic.
Doctors have identified discirculatory encephalopathy. In other words, his brother poor blood circulation in the brain, and from this, if you do not take any kind of serious action, the brain will work worse and worse, until my poor brother did not fall into insanity finally. I am alarmed. At forty-three brothers - is quite healthy, intelligent man and turn him into a vegetable worthless. I decided to use his journalistic talents and find out the best method of treatment.

I spent three nights on the Net, on specializedsites and health forums. He studied at the library several encyclopedias about drugs and diseases. Met with a friend, a doctor, was with her a long conversation. As a result of these works I found almost everything that interested me.


Lack of blood supply to the brainIt creates conditions for the development of multiple microinfarcts, which is accompanied by changes in the brain tissue density. The brain begins to gradually atrophy, which leads to breakdown of the higher mental processes. That is, the performance gradually decreases, increases irritability begin severe headaches, memory is getting worse, worse person focuses, etc. As a rule, the patient overestimates his capabilities and does not believe that was the work objectively worse.


What to do? Firstly, we need a healthy lifestyle and lack of stress. Proper nutrition, exercise, fresh air, a good rest, any relaxation techniques such as autogenic training or meditation.
Secondly, it is necessary to stimulatebrain circulation and metabolism in the brain tissues. To do this, the doctor prescribed a number of drugs Anton. Something prompted me once in a pharmacy that I have found during their search on the Internet. In general, the list looks like this: B vitamins, cinnarizine, "Nootropil", "Fezam", "stugeron", "Tanakan", "Instenon", "Cavintonum".

The clinic was discharged vitamins and either "Fezam" or cinnarizine with «nootropil". The rest - this is what I managed to find itself.

Cinnarizine - a stimulant of braincirculation, acting through the expansion of the cerebral vessels. It has sedative side effects, ie, It causes lethargy, drowsiness. "Nootropil" - neuroprotective drugs. It improves metabolic processes in the brain. He also has a side effect - stress and insomnia. Together, they help the brain optimally, the affected circulatory encephalopathy. However, patients need to remember when to take what pill to not start to fall asleep in broad daylight, or did not earn insomnia. Usually "Nootropil" cinnarizine appointed with the following scheme: "Nootropil" two times daily (morning and afternoon), and cinnarizine - 3 times a day.

"Fezam" - this cinnarizine and "Nootropil" onevial. It contains both cinnarizine and piracetam, the active substance "nootropics" "Fezam" in each capsule. Good that is effective as well as both of the above formulation, but deprived of their side effects.

"Stugeron" usually prescribed for maintenancetherapy, prevention of cerebrovascular pathologies and disorders of the peripheral circulation. The active substance "stugeron" - the same cinnarizine. Therefore, it also brings lethargy and drowsiness.

"Instenon" affects the metabolism and cellbrain and heart muscle. His long list of contraindications. Includes a state of strong excitation and convulsions, symptoms of increased cerebral pressure, epilepsy, cerebral hemorrhage, recent stroke, carotid stenosis due to atherosclerosis. I guarded all this.


Touted medicine "Tanakan" containsplant extract of Ginkgo biloba. Natural, without contraindications. This is a plus. Minus - the high cost of packaging. We must also bear in mind that the course of treatment - this is not a package.

"Cavintonum" I was advised on somemedical forum. This is a good concealer stroke, long known to doctors, it helps with cerebrovascular insufficiency. It has a stimulating effect, so it is prescribed only take in the morning and afternoon hours. Very soft, it can and should be used for a long time. It is in this - its main disadvantage. To experience the effect, "Cavintonum" should be taken at least six months, if not years.

After considering all of these options and assess their advantages andcons, and quality / price ratio, I advised Anton buy "Fezam" and vitamins. How, indeed, and the doctor advised. I decided not to experiment. "Nootropil" with cinnarizine were swept away as creating unnecessary confusion: I'm not sure that my brother with his memory disorder will remember, when it is necessary to take.

On my insistence, the diet was replaced by Anton -stopped eating your favorite fried and fatty meals, I began to regularly walk in the fresh air. I dragged him books on relaxation. However, not sure he actually engaged in it. "Fezam" brother and vitamins takes three times a day. The treatment course of two months he was appointed. Since the beginning of all this activity a month passed, and I recently communicated again with my brother, I realized that everything is done correctly. Anton obviously freshened looks cheerfully. He was again the optimistic and even the person with whom I used to talk. According to him, he began to tire visibly smaller. However, not sure I fully regained ability. But with the scattering problem exactly left behind. His head still aches sometimes, though less.