Almost all the plants have medicinal properties. Nettle is no exception. It is useful as a hemostatic, protivovospalietlnoe means. What treats stinging nettle?

As soon as the spring floods subside and awakenthe sun warmed the earth, on the banks of rivers, streams, along ditches and fences among the first blades of grass shoots appear nettle, and in June on the tops of the stems already visible spike-like inflorescences of small greenish flowers.

This is a perennial plant with straight stemIt reaches a height of 150 cm. The leaves and stems are covered with stinging hairs, which in contact pierce the skin and easily break off. The resulting wound with hair out of the cavity as a tooth of poisonous snakes, implies a liquid containing formic acid. It was she who causes a strong burning sensation.

Nettle - one of the most commonweeds, it can be found almost everywhere. As a medicinal plant, it has long been known. Avicenna said: "The drug makes the dressing with vinegar opened sores, helps them, benefit when hardening ... crushed nettle leaves stop bleeding from the nose ...".

That is why from the XVI century, decoctions of the leavesIt has been widely applied in the lung, intestinal and uterine bleeding. However, at the beginning of the XX century nettle fell into the category of forgotten herbs. During World War II, when the need for a styptic soared again reminded of nettles. Scientists have been created liquid extract from the leaves, have rendered good service in hospitals.

For medical purposes harvested leavesplants that are harvested only during the flowering period (June to August). Treat them, wearing gloves, dried under a canopy or in a well ventilated area. After drying, the browned or blackened leaves are removed.

Recipes tinctures and infusions of nettle

Infusion prepared as follows: one tablespoon of crushed dried leaves pour a glass of boiled water, 10 minutes and filtered. Take a tablespoon three times a day. Bulgarian experts believe that nettle has a favorable effect on metabolic processes. Therefore, they are advised to take an infusion with anemia, arteriosclerosis, rheumatism, diseases of the biliary tract and liver, hemorrhoids, habitual constipation, digestive disorders, to use as a tool that increases the flow of milk in nursing mothers.

To prepare tincture for external use, In a glass of boiling water put two tablespoons of crushed leaves. Compresses and lotions stimulate granulation and epithelialization of the affected tissues for burns and wounds.

Beauticians recommend the infusion of nettle as ameans to strengthen the roots more, reduce excessive greasiness of the scalp and dandruff destruction. To do this, after washing hair rinse infusion or rubbing it into the skin.

Tincture. Take 200 g of the May nettle pour 0.5 liters of vodkaor 70% alcohol. Throat tie gauze or cloth. The first day on hold window, and the remaining 8 days in a dark cabinet. Strain, squeeze, filter, store in a dark bottle.

Take a teaspoon on an empty stomach 30 minutes before a meal and 1 teaspoon at night before bed. Drink the entire infusion.
Man is vigorous, healthy, heart, improves your work, improves blood composition, movements become easier to pass sclerosis. 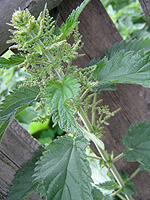 Most of us perceive it as pricklyweed and no more. And in fact, this plant enjoys an excellent reputation among the medicinal plants in Europe revered since ancient times, and today there can be found the whole plantation of a nettle.

One hundred-one hundred and fifty grams of nettle per dayable to provide the daily requirement of the body in almost all materials to ensure excellent health, because it has all the good work that is able to restore power to our body.

Nettle seed, combined with honey is able to deliver us from colic and from the chronic cough, but do not forget to use an old drug as often as possible.

It helps nettle and increased content inblood sugar, for this you just have to prepare a medicinal decoction of nettle leaves: two tablespoons of nettles pour two cups of water and put on a slow fire for fifteen minutes. After that, the broth should drain and cool.

Take the finished drug one tablespoon three times a day.

If you want to normalize and improve heartthe activities you need to pour half a liter of water five tablespoons of nettles, followed put everything on low heat for fifteen minutes. After that, drain the broth, and take half a cup four times a day, this broth has a truly miraculous effect. Indispensable nettle and anemia, liver diseases, inflammatory processes in the gastrointestinal tract.

Because of their young and tender inflorescences nettle can make great medicinal tea, you are only required its regular consumption.

Moreover, consumption of this drink should becorrelated with the lunar phases. In this case, your position will be not only more durable but also more efficient, with the decrease of the moon, when it will be a letter to be increased With the usual rate of nettle tea.

The best time for this tea are hours from fifteen to nineteen. If you have sore joints, it is recommended to apply to them, cooked gruel of nettle root.

Nettle and help with hair loss: One tablespoon of herbs is poured one cup of boiling water and infuse for two hours, after which the infusion should drain. Cooked means is used as rubbing the scalp.

So, do not rush to remove the prickly doctor with their land, he will still will provide invaluable service in matters regarding your health.