Gastric cancer, stomach cancer is all about, causes, symptoms and treatment of gastric cancer. 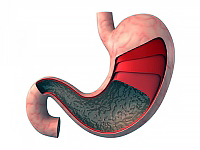 Malignancies in the stomach occupysecond place among all cancer diseases in Russia, giving primacy lung cancer (in men) and breast (in women). Location, morphology and susceptibility to the development of metastases affect the prognosis of the course of treatment.

All about stomach cancer

Early detection of stomach cancer on his symptoms and additional survey results allows the early stages of the disease and stop the development of the formation of metastases.

Stomach cancer, like other cancerspathology develops for reasons unknown exactly today the official medicine. During the years of observation were the basic factors potentially influencing the possibility of the disease:

Doctors also secrete a group of so-calledprecancerous lesions that can cause stomach cancer. Among them, gastritis, peptic ulcer disease, pernicious anemia, polyps, post-resection and so on.

Symptoms of cancer of the stomach

Stomach cancer in early stages is not practicallymanifested, so it can only be diagnosed by passing a special examination. Sometimes, in this period, patients reported nonspecific symptoms (fatigue, weakness, loss of appetite), who wrongly attributed the temporary disorders. In the later stages of cancer expressed pain in the upper abdomen, nausea, belching, vomiting, feeling of fullness after a meal. In many cases, a tumor can develop without showing symptoms, so already diagnosed at later stages in disrepair.

The most dangerous complication of gastric cancer - appearancemetastases in other organs, often with lesions prone to liver and lungs. Cancer cells in these organs confirm the presence of the latter, the fourth stage of the disease, when cure it completely is not possible. For these patients, modern medicine has developed a set of measures, allowing to extend the life considerably.

Treatment of cancer of the stomach does not allowself-treatment, all appointments should be made only after a comprehensive survey of a physician and determine the extent of tumor development. Practice shows that the disease is identified at an early stage, quite effectively lends itself to therapy, so to delay visit to the doctor to patients is strongly discouraged.

The most effective treatment for stomach cancersurgery is the complete removal with neoplasms, and any other methods can not replace it. Depending on the degree of tumor your doctor may prescribe an additional combined use of radiation and chemical therapy.

As there are no exact causes of cancerstomach, and no precise recommendations that can guarantee to protect the patient from the occurrence of malignant tumors. However, each able to reduce the risk of the disease, protecting themselves from the factors causing its appearance: revise diet towards a useful and healthy food, give up bad habits and undergo regular check-ups for early detection of risk.

How to beat insomnia and stress?