The main symptoms and treatment of non-Hodgkin's lymphoma

The concept of non-Hodgkin's lymphoma 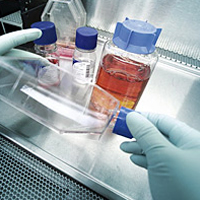 The main task of the lymphatic system - the fight againstinfections using three types of lymphocytes: T cells, B and "natural killer". Most of the lymphocytes are found in lymph nodes, but can be found in many other parts of the body, particularly bone marrow, spleen and peripheral blood.

Symptoms and diagnosis of disease

Common symptoms include increasedlymph nodes in the neck, in the armpits, or in the larynx. Malignant lymphocytes of lymph nodes is stick together, resulting in the formation of subcutaneous formed in the bones, liver and lung.

The patient complained of fever, fatigue,loss of appetite, sweating heavily at night. Because the lymph nodes swell when the body fights infection, itself swollen lymph nodes can not be considered as an indication of lymphoma. Lymphoma is diagnosed only after a biopsy (microscopic examination of lymphocytes of the sample) and the identification of a significant number of infected lymphocytes. Biopsy samples were taken from lymph nodes, or skin, of the lungs, liver, etc., that is, from where can be localized lymphoma.

Generally, chemotherapy includesuse a combination of several drugs that kill the malignant cells. Medications commonly used 3-for-4 weekly cycles, which, however, depends on an accurate diagnosis, possible use of other chemotherapy regimens.

This primary chemotherapy lasts for 6-12 months,during which the drugs also kill healthy cells, so patients undergoing chemotherapy, may suffer from various side effects, including nausea, fatigue, increased susceptibility to infections.

In non-Hodgkin's lymphoma, bone transplantationbrain often used to treat patients whose primary or develop resistance during treatment (lack of effect of treatment) to chemotherapeutic drugs. In order to overcome this resistance are used very high doses of chemotherapy to destroy not only cancer cells but also the patient's bone marrow. Bone marrow function is restored by means of the infusion to the patient his own stem cells. This is called an autologous transplant, and this is the main type of transplantation with non-Hodgkin's lymphoma.

When allogeneic bone marrow transplantationusing hematopoietic stem cells from another donor, or a related, or unrelated, donor found in the database. Typically, allogeneic transplantation is used to stage 4 non-Hodgkin's lymphoma. On the 4th stage, the tumor spread beyond the lymph nodes to other organs - lungs, liver, bone marrow. It is important to emphasize that the decision to hold the transplant can only be taken by the patient and his loved ones.