Polydactyly - it is very common and quiteharmless congenital anomaly. In this case the person on the arm or leg has extra fingers, the number and appearance of which may vary. For more information about additional fingers read the article.


Polydactyly - this increase in the number of fingerson the hand or fingers stope.Uvelichenie numbers may be different - from one extra finger (six-toed) to 3 or even 5 extra fingers (desyatipalost). Additional fingers can be either completely all the constituent elements phalanx joint, or only some of these elements. This disease is inherited. 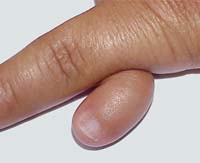 The most common type of boundarypolydactyly, when additional finger is to the edge of a hand or foot. Most often, this is a bilateral polydactyly that is evolving at both extremities. On hands from the big toe is most often observed splitting its last phalanx. Sometimes it does not reach full splitting the phalanx, and it is only the tip is bifurcated. This strain is often inherited.

Some scientists propose to dividepolydactyly into three types: extreme split finger (thumb or little finger), the replacement of one extreme toe two fingers or more additional fingers and thumbs as additional non appendages. These fingers are usually hanging on a thin skin and leg are not able to function normally.

The most common is the extra little finger, and he can either hang on the leg and be a fully developed finger having a skeleton.

Diagnosis is not difficult.

Treatment with surgery alone. Before the surgery, the doctor is necessary to clarify the details of the finger state, its connection with the neighboring finger and brush. It is advisable to remove the finger together with the corresponding metacarpal bone, if it exists. It is an error leaving at least a small portion of the extension of the phalanx of a finger. This bone residue in the future can grow and form a projection that require re-operation.

Operate follows from the first months of life. In the presence of a fully developed extension of the thumb, equal in size to normal, where it is difficult to determine which finger to remove, the operation should be for some time to delay, to be able to find out on what finger work better tendons and muscles of the machine and whether a defect in bone development. Usually less developed finger placed outside.