The wounds from the bites

What are the wounds from the bites? What are the health hazards of these injuries? Diagnosis and treatment of wounds.


Appeals about bite wounds arequite frequent in ambulatory surgical practice. Bite wounds are generally contaminated by various microorganisms which can lead to infection and, in the absence of medical assistance, the development of complications such as local abscess, osteomyelitis, septic arthritis, meningitis, sepsis and abscess deleted. Infection occurs most severely in patients with immunodeficiency.

The wounds from the bites

Human. Wounds after a human bite may occur whenphysical violence (eg when the skin is damaged teeth when struck in the jaw) and in the process of sexual intercourse (the so-called "love bites"). The bites are localized mainly on the fingers or hands, at least in the neck, chest, genitals. About 30% of abrasions on the hand caused by a blow to the teeth, accompanied by deep ligamentous injuries and infections and bone development apparatus, particularly in the later (24 hours later) applying for medical assistance. Bacteria contaminating the wound presents streptococci, Staphylococcus aureus, Homophiles spp., Fusobacterium spp., And other anaerobes bacteroids and Eikenella corrodens. Infection with viruses such as hepatitis B virus, hepatitis C virus and HIV, there has been much less. 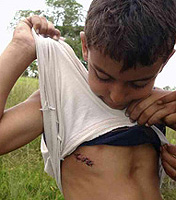 Dogs. Injuries after dog bites contaminatedoral microflora animal data, typically including such pathogens as a Pasteurella spp., Streptococcus, Staphylococcus, anaerobic bacteria, and 2-30% of cases accompanied by the onset of infection. Capnocytophaga canimorsus, a Gram-negative bacillus, occasionally contaminating dog (and cat) bites can lead to the rapid development of potentially fatal septic syndrome, especially in immunocompromised individuals. When the bite of stray dogs should be aware of the possibility of rabies.

Cats. Cat bites are most often presentedstab wounds, making it difficult to process them. Lesions are localized mainly on the hands and forearms, and in 2/3 of cases are accompanied by the development of infection. Approximately 75% of cases the infection is caused by representatives Pasteurella spp, including other agents -. Wide range of aerobic and anaerobic microorganisms. Cat scratch disease can occur at the site caused to a dog or cat bite or scratch. The infection is caused by Bartonella henselae, and seen the emergence of erythematous papules (usually 3-10 days after injury), and regional lymphadenitis obscheinfektsionnoy symptoms. The disease is permitted after 2 months, but in some cases may be complicated by the development of pneumonia, encephalitis, or hepatitis, rare pathology of the vision.

Rodents. Bites from small rodents, such as mice, rats,hamsters and guinea pigs, can be contaminated by a number of microorganisms, including representatives of Pasteurella spp. and Streptobacillus moniliformis (calls "rat bite fever"). Bite proteins can be expected to lead to infection with fever or tularemia.

Other animals. Bites horses, donkeys, pigs and sheep can beinfected representatives Acinetobacillus spp., Pasteurella spp., staphylococci, streptococci, and anaerobic bacteria. Bites ferrets contaminated with Staphylococcus aureus. With the bite of bats transmitted rabies. Bites camels lead to infection of the representatives of Pseudomonas spp., Staphylococcus and Streptococcus, and Clostridium tetani. Bites from infected monkeys predominantly bacteroids, fuzobakterii, staphylococci, streptococci and E.sorrodens. With macaques can be transmitted by the bite of the herpes virus B (Herpesvirus simiae), leading to the development of rapidly progressive encephalomyelitis, in which mortality reaches 70%.

Diagnosis and treatment of wounds from bites

In the primary treatment is collectedhistory (time and type of animal bite), smear sampling for bacteriological examination and initial debridement. In the presence of systemic signs of infection are also carried out blood sampling to detect aerobic and anaerobic pathogens. When contamination of wounds with soil, plant fragments or water from ponds, lakes, tanks, as well as in patients with immunodeficiency performed bacteriological examination for mycobacteria and fungi. When you bite a person, you must also carry out a survey on the infection of hepatitis B virus and HIV. Other clinical and instrumental examinations are performed according to indications (eg, X-ray or ultrasound for suspected involvement in the process of the bones, joints or the presence of a foreign body in the wound).

wound treatment is washingsaline or water damage in a shallow antiseptics may be used (hydrogen peroxide andone or povidone). Closure of wounds is recommended for fresh (less than 6 hours) allegedly not infected processes as well as for cosmetic purposes (on the face). Delayed wound closure (3-5 days) are used in prescription bites more than 6-8 hours, localized in the extremities and accompanied by crush injuries.

Indications for hospitalization are fever,sepsis, progressive cellulitis, pronounced edema or tissue damage, loss of limb function, immunodeficient condition of the patient, as well as infection with dangerous infections (eg, Herpesvirus simiae), in which patients should be quarantined.

Appointment of preventive antibiotictherapy shows bites man, cats or complicated by dog ​​bites, as well as the localization process in the limbs, genitals and face, severe degree of damage involved in the pathological bone process and joints or localization bite near the prosthetic joint and patients with immunodeficiencies of various origins .

The choice of antibacterial drugs carried out onBased on the data of bacteriological research. Pending the results of its drug of choice is amoxicillin / clavulanate (625 mg 3 times a day for adults). If allergy to penicillin can assign metronidazole in combination with doxycycline bites of cats and dogs. Human bites may also be used in combination with metronidazole, erythromycin, but preferred is the use of ciprofloxacin in combination with clindamycin. In severe nature of the infection antibiotics are administered intravenously, the duration of therapy depends on the clinical dynamics.

Prophylactic antiviral therapy (virushepatitis B, HIV, rabies and Herpesvirus simiae) held under suspicion of the possibility of infection according to standard regimens. Preventing tetanus (tetanus vaccine and tetanus immune globulin) is carried out in the absence of a confirmed patient's immunological history (ie data and the timing of the planned immunization of tetanus). If there is risk of contracting hepatitis or HIV patient monitoring should be continued for at least 3 months.

How to fight against mosquitoes