Home>Other>How not to get into a sect

How not to get into a sect

What are the sect? The more dangerous sects and how they go? The answers to these questions can be found in the article.

Almost every major city - a kindmarket sellers of honey: the sect, congregation, community jumped on seeking the truth, and maybe just lonely or unhappy people, praising their product and inviting to try. Stretching drop of honey on a dirty piece of paper, they persistently circling around an ordinary citizen, just like the bees, although honey is not collected themselves. And the choice is really very wide. Moonies, Jehovah's Witnesses, Mormons, Hare Krishnas, "Going with God," Adventists - the list is far from exhaustive. The Orthodox Church, to put it mildly, frowned upon looking at them.

And each sect with delight shouting that theirbeliefs are true. Only their product delicious and real, not diluted sugar Vodicka! But the best praise goods than bitterly disappointed. Many sects have to pay a tithe - a tenth part (hence the name) its honestly earned wages. Some come up with a variety of rules to create the appearance of a serious and respectable religion. Poor Krishna, for example, can not eat meat, fish, eggs, biscuits, sweets, chocolate, drinking coffee and even tea and bread they are unfortunate, they bake themselves. The recipe is very simple - flour and water. Soda they believe poison (although they are not far from the truth!). 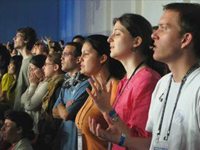 You can reasonably noted that no one in the sectforcibly pulls. "Oh, I certainly will not go into any sect!". It would be wrong, but at any time you may become ill, throw a guy or a girl, deceived by friends - and here you are the perfect prey for the sects. In sects there are many ways of recruitment and retention of their followers.

First will be in every way to show that youvery necessary sect, you all love and respect. And who does not like it? That's like the Mormons provide all the thirty-three fun - they feed, teach English, organize different parties with games, show movies, and all that - absolutely for everyone, but not for free. Money of course, they do not take, but at each event arrange a short lecture. It is clear what the topic (who do not understand - about God, about their religion and Book of Mormon).

I must say, of all the sects had seen me this -the most harmless. Their unfairly considered a terrorist organization and American spies. Much worse, they begin to use your time and gradually you enter into subjection to them. And then begin to monitor all areas of your life. Ringing, lead discussions, come to your house, you have to go to their meetings, to invest in all the activities. You lose your freedom, and more and more difficult to get out, because every Mormon must attend the two-year mission. This, of course, interesting, but for two years you fall out of the familiar life, work, school, on the money you're going to the city, where you have determined where you rent an apartment, you walk through the streets with the Mormon book under his arm, badgering passersby . Well, if you listen with a smile, and in fact can and send to hell.

In fact, it is difficult to resist, besides allthese "prophets" have the gift of eloquence, and can not convince, probably only the most ardent skeptics and very religious people. The sectarians often stick in the streets, handing out magazines, leaflets. Of course, you should not send them and spit in their faces, they are human beings, too, are caught in the net of the sect. I always listen to all the polite and gaze at with interest magazines (by the way, Jehovah's Witnesses, the magazine "Awake" is very entertaining. It varied mass of information on the geography and biology). Some I even came - to learn more about the life, the people who surround me.

The sects of Christian origin, Hare Krishna,various branches of Buddhism - all based on the same truth. For the outer shell is hiding the same. In the depths of all faiths one stream flows ... And even if you're in a cult and categorically does not want to go away from it - you can live with. They, too, can something to teach - to love our neighbor, to give up bad habits. Anyway, according to statistics (stubborn and impersonal science), most of the people leaving the sects. The disappointment sooner or later will visit everyone when he finally notices the contradictions, ritualism and contrived regulations. Much more dangerous sect, built not on religion. Is there any ordinary gray man suddenly recognized prophet or even God. He is worshiped, work, to give him all the money on it. In such a sect easy to get into, but hard to get out before the deadline. A period usually occurs when a sectarian nothing left to squeeze. And it - the sick, the unfortunate, not money thrown into the street.

If such a cult hit close to you people -to take urgent for his salvation. But this should be done cautiously. It is impossible to convince and persuade the victim. After all, the first thing he hears people caught in the cult - is that he was lucky scary. He's in the community, which will be saved, which granted forgiveness (do not forget that she knows the truth, and no one else). And anyone who tells him the opposite - the enemies. He is told: "You'll see! Will you tell them about us, and they will tune you against. " That is, the protests of their closest person perceives as a confirmation of the correctness of the sect. Thus, if not immediately turned back another, looking for evidence of the machinations of the sect, show, on a cool car goes head of the community ...

In general, it remains to wish you only one thing - beware, ladies and gentlemen! If you live well, it could someone please, if you live poorly - too sure there are "benefactors."