Home>Other>Influence of terrain on human health

Influence of terrain on human health

How does the surrounding landscape have on our health? The answer to this question can be found in the article.

Man always tends to the forest, the mountains, the sea, rivers or lakes.
Here he feels a surge of strength, vigor. Indeed, some say that it is better
just relax in natural surroundings. Sanatoriums, rest houses are built in the most
beautiful places. It is not an accident. It turns out that around
landscape can have different effects on the psycho-emotional
state. 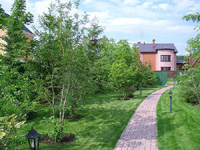 Contemplation
the beauties of nature stimulates vitality and calms the nervous
system. Vegetable biocenoses, especially the forest, have a strong
health benefits. Link to the natural landscape is particularly strong in
residents of the city. In the Middle Ages, it was observed that the duration of
residents living less than that of rural residents. The lack of greenery, narrow
streets, small courtyards where the sun barely penetrates
light, creating unfavorable conditions for human life. With development
industrial production in and around the city appeared
a huge amount of waste that pollute the environment.

Diverse
factors associated with the growth of cities, in one way or another affect the
the formation of man, on his health. It makes all the scientists
seriously study the impact of the environment on the inhabitants of the cities.
It turns out, from a man living in what conditions, what height
ceiling in his apartment and sound transmission as its walls as
man gets to the place of work, with whom he routinely calls,
the surrounding people relate to each other, it depends on the mood
man, his ability to work, activity - all his life.

AT
cities, people come up with thousands of tweaks for the convenience of his life -
hot water, telephone, various modes of transport, roads, scope
service and entertainment. However, especially in large cities strongly
manifest and disadvantages of living - housing and transport problems,
increasing morbidity. For example, the saturation of the medium, and
production of high-speed and high-speed machines increases
voltage requires additional effort from the person, which results in
fatigue.


Do not harm health

Given the ability of green spaces
favorable impact on the environment, they should be
closest to the place of life, work, study and recreation.
It is important that the city was biogeocenoces though not absolutely
favorable, but at least do not harm human health. Let there be
living area. To do this you must solve a lot of urban problems. All
enterprise sanitary unfavorable relation must be
displayed outside the cities.

Green areas are
an integral part of a package of measures for the protection and transformation
environment. They not only create favorable
microclimate and sanirno-gigenicheskie conditions, but also increase
artistic expressiveness of architectural ensembles.

special
place around industrial enterprises and highways should take
protective green zone, where it is recommended to plant trees
shrubs that are resistant to contamination. The placement of green spaces
you must observe the principle of uniformity and continuity for
provision of fresh country air supply to all residential areas
cities. The major components of the system are the city landscaping
planting in residential areas, in the areas of children's institutions, schools,
sports complexes and so on.

Urban landscape should not be
monotonous stone desert. The architecture of the city should seek
a harmonious combination of social aspects (buildings, roads,
transport, communications) and biological (green areas, parks,
squares). The modern city should be regarded as an ecosystem in
which created the most favorable conditions for human life.
Therefore, it is not only comfortable housing, transportation, diverse
services sector. This is favorable for life and habitat zdorovyasreda;
clean air and green the urban landscape. Not coincidentally, the environmentalists
They believe that in the modern city people should not be divorced from
nature, as it were dissolved therein. Therefore, the total area of ​​green
plantings in cities should occupy more than half of its territory.