What to do if you meet an aggressive stray dogs? How to behave in order to stay safe and sound? 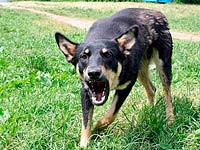 Have you ever met a stray dog? Have you ever scared when you carried a huge shepherd dog with bared mouth? Do you know what to do to a dog you are not touched? There are clear rules of behavior when meeting with a lonely dog ​​or a pack. Knowledge of their - considerable force. We learn not to be afraid.

Means of protection from dogs

Let's look at the world from a dog's point of view.
In the dog world, who is stronger, he is right. And the main determinant of weakness - fear. If you're afraid, you're a dog - a victim, and you have to attack. Therefore, the first rule of protection against attack dogs - courage. Or rather, the lack of fear. The dog clearly recognize your fear: feeling hormones, says changing your movements, sees pupil dilation and sweating feels.

You have to understand: if you are at a meeting with the dog looks cheerful, but in fact the heart in your heels, does not work nothing: the dog is likely to attack. Therefore, learn to overcome fear. Confidence - the most important means of defense against dogs.

Suppose that you deal with the fear. What can we do to protect themselves from dog attacks as a specific action worked for sure?

The dog has a strong sense of territorialaccessories. There is land, which it believes will protect her and attacking anyone who invade it. It's common for stray dogs - a vacant lot on which it resides. There are neutral territory, where the dog will closely monitor your behavior. If it seems that you are encroaching on her territory, she warns: bark and growl will repel you away. On someone else's territory as a dog if it is healthy physically and mentally, will not attack, it is not safe for her. 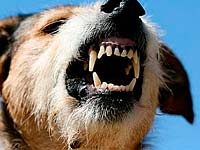 Therefore, if you know you have reachedneutral territory, your job, looking into the eyes of the dog, slowly back away, beyond the "no man's land" area (about 10-30 meters from the boundary of the canine area). If you manage to do this, the dog will lose interest in you.

If the dog barks, then attack it is not going to, it just scares and warns.

A dog that is on its territory prepares for an immediate attack, will press the ears to the head, dropping his head down and slowly crept to move in your direction. In this situation, you can not:

If you see a dog ready to attack,bend down to the ground and try to pick up a stone or a stick that comes, not taking his eyes off the dog's direct gaze. For dogs, this will mean that you are not a victim, and the opponent. Even if she did not give up, this behavior will lead her into confusion, and you will have more time to retreat (yes, you continue to back away slowly). If you Me underfoot any "weapon", throw it in the dog: there is a chance that it decides not to get involved. Do not stop to watch the dog's eyes.

Once you have reached a place where you canescape (in Ideally - fence), try to escape, so that not for one second to turn your back on the dog. It is in any case faster: catch up with you in a few moments to attack.

If the dog attacked, it is likely to bebite your legs. Shrugs off her in every way, trying to get on the back and head. Do not believe those who say that you have to beat a dog's nose. You're unlikely to get. So just protect yourself.

Meeting with the pack - it is much more dangerous thanmeeting with the dog-loner. Methods of protection there are the same: identifying the leader (usually the largest dog standing in front of the middle), look him straight in the eyes and retreat. Do not let the other dogs behind him. But assurances that the attacks will not, alas, no. You just have to rely on luck. So it is better to avoid all places where there may be a stray dog ​​pack.

Protecting the cyclist from dogs 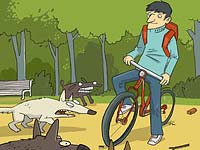 Dog (and even a pack) is unlikely to attackcyclist riding is likely to be limited to the case, barking and chasing. Here the rule is the same: do not be afraid. If you got cold feet and stopped, retreat under the cover of the bicycle, it will serve as a good shield. Protecting the cyclist from the dogs - fearlessness and bicycle.

Unfortunately, none of the technical meansprotection usually does not work. Ultrasonic repellent, gas cartridges, handguns and other acts unpredictably and could further enrage the already aggressive dog.

Our advice: Avoid locations where there may be stray dogs. Vacant lots, abandoned buildings, landfill - the wrong area for Sunday walks, if you value the health and life. And learn not to be afraid.