Fasciola sylvestris is widespread,and Fasciola giant occurs in regions with warm climates (in Astrakhan and Guriev regions, the Caucasus, Central Asian Republics and Kazakhstan) as well as in the southern regions of Yakutia.

The forms of existence 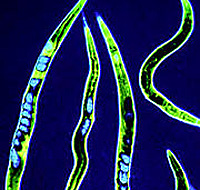 The eggs of parasites are excreted in faeces fallin water. Turns into larvae (miracidia) that penetrate into the body of freshwater mussels childbirth «Galba, Lyimnaea», where the asexual reproduction of Fasciola. Left out of the mollusk ciliated larvae (adolescariae) attached to aquatic plants and form cysts. Swallowed parasite larvae are released from the shell root into the mucosa of the small intestine and actively destroying parenchyma (tissue), liver, penetrate it and bile ducts where reach sexual maturity.

One metacercariae (infective larvae stage) allocates to 1000 eggs, which then fall intointestine and excreted into the environment. In fresh water at favorable air temperature (+ 20-30 C) is formed from an egg miracidia, which overlooks the water. Its length is 0.15 mm. From the moment of entering adolescariae (larval stage of development) in the liver to the development of sexual maturity takes 3-4 months. Fasciola in the liver of ruminants live 8-10 years, a person can parasitize up to 15 years or more.

The main factors are the toxic-enzymatic effect of the parasite larvae during their migration. The incubation period is 1-8 weeks.

The effects of parasitism in the body

Exodus fascioliasis diseases associated with biologythe development of the pathogen. Young Fasciola injure the small intestine mucosa, are introduced into the capillaries and then through the portal vein to the liver. As a result of tissue damage with Fasciola migration through the body inflammatory processes occur in the blood vessels, bowel wall, lymph nodes, peritoneum, liver and bile ducts. Accumulating in large amounts, parasites can occlude the bile duct, which causes bile stasis. Fasciolas carry a large number of pathogenic microorganisms from the intestines to organs and tissues. During the migration of the Fasciola dies, releasing a large amount of toxins that have allergic effects on the host organism.

Methods of diagnosis of fascioliasis

Diagnosis is based on clinicalpaintings, dysfunction of the biliary system, allergic symptoms and epidemiological history (eating aquatic plants, herbs, vegetables, fruits, obmytyh water from open reservoirs in areas fastcioleza spread). Diagnosis is confirmed by the discovery in the bile and feces parasite eggs.

Treatment is carried out under the scheme as a opisthorchiasis. Assign hloksila biltricid or abroad for this purpose is recommended to use triclabendazole. After a course of treatment to apply cholagogue within 1-2 months. We need long-term (at least one year) clinical examination of patients.

Prevention is based on recovery of large andsheep and goats by the treatment of fascioliasis, cleaning of pasture contamination of animal faeces, pasture and water survey for the presence of molluscs. In areas where the spread of fascioliasis can not drink water from natural sources, wash it greens, vegetables and fruits that are used in raw form.