The seven-year boy can not sit still thanIt brings to the insanity of teachers and parents. This is a typical case of attention deficit hyperactivity disorder, in which the reduced level of concentration and attention pathologically increased distractibility. Learn about the main symptoms of ADHD in children and try to understand this disorder.

Attention Deficit Hyperactivity Disorder(ADHD) is characterized by hyperactive behavior and an inability to concentrate. Many children have difficulty concentrating, but for some this disorder is accompanied by increased activity. Children with ADHD cannot sit still, they are restless and nosy, often interrupt others, constantly run and jump.

According to statistics, about 3-5% of schoolage suffer from attention deficit disorder and hyperactivity. Approximately 10% -50% syndrome persists into adulthood. By adolescence, motor hyperactivity usually goes away, but learning disabilities, lack of attention, inability to concentrate the majority of children are saved. The exact causes of ADHD are unknown, although one theory, it is based on an imbalance of chemical transmitters - neurotransmitters - in the child's brain, because of what he is, is able to control his behavior. ADHD is often genetic in origin. Boys are three times more at risk for the formation of attention deficit hyperactivity disorder than girls.

The main symptoms of attention deficit disorder with hyperactivity: 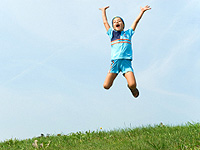 Diagnosing attention deficit disorder andHyperactivity is very important for the formation of a correct understanding of this disorder. The diagnosis should involve teachers, parents and doctors. Often the diagnosis is necessary not only to complete a medical examination, and professional assessment of cognitive abilities and IQ of the child, as well as an analysis of its performance at school.

Also, an assessment of speech and languageabilities. Attention deficit hyperactivity disorder is often accompanied by other behavioral or emotional disorders. Children have difficulties difficulties in the team peers. They are easily recognized by their behavior - they fidget, run, jump into the classroom. Attention deficit hyperactivity disorder and high levels interfere with the child to communicate normally with others.

A child with attention deficithyperactivity, usually trained together with their peers, but the teacher should pay attention to their needs, for example, be given more time to complete the task, put the child in a part of the room where it will be less distracted.

The child also needs the support of adults andaid in controlling the level of attention and behavior. To train such a child should be supporting the use of modern teaching methods to help you focus and learn the training material. Treatment includes behavioral and drug therapy. The treatment should involve not only the family but also the school.

Parents and teachers need to learnadjust the behavior of the child, to direct his energy and encourage the child's progress. This implies the development of problem solving skills, skills, open and effective communication, anger management and conflict resolution. Drug treatment is limited to taking stimulant drugs group amphetamines, such as Ritalin and Dexedrine.

These drugs reduce the level of hyperactivity inchildren and help concentrate. Also, an improvement in behavior (reduction of aggression, forgetfulness). However, these drugs have several side effects, in particular, cause insomnia, loss of appetite, weight loss, depression, depression and lethargy.