Autists and their universes

There are children living in their own world and who do not want to know anything about our. These are children-autists. Being a parent of such a child is not easy. But easily - after all, it is a native child, let it be different than ordinary children. He only needs to help, accept it and - understand. After all, know autism - it means to defeat it.


In imprisonment in your own soul 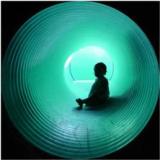 Autists saw: about those who did not notice in the emphasis before, began to speak... But not only the film Levinson highlighted the problem. According to some data, the autists in our time appear on the light 10 times more often than before. If in 1993 in America, 15,500 children, patients with autism, were studying 42,500 in five years. In the world for every 10 thousand newborns accounts for 15-20 «Rain people». It turns out that now autists on Earth millions. And their number is constantly growing...

Why are so many kids suffering from autism, it is born in imprisonment from his soul? Perhaps due to the deterioration of the natural situation, the diseases of the mother, hormonal disorders, and even, according to one of the versions, infection with the virus, which prevents the normal movement of nerve cells in the emerging brain. The reasons for autism are looking for in early illnesses and even in vaccinations, and even in the fact that sick children have learned better to find out...

Perhaps this is a hereditary defect, and the disease is not encoded by one, but by several genes that can be taken from the father and from the mother. But there is no exhaustive answer yet. And all versions are equivalent to a fantastic hypothesis that autists — This is a native planets that make their dance around the Sun is not the way our.


In the shakers of the snow queen

Autism can not be determined while the child is in the womb. His symptoms become visible only after birth: the baby does not show a revival, almost does not react to loved ones, does not smile... When such a child takes on his hands, he does not show any emotions and often seems deaf or blind.

Typically, signs of autism are fully manifested between 1.5-3 years. A cold little prince appears in the house, kid, enchanted by a snow queen.

Here are just some of the signs of early child autism.

The farther, the more problems with self-awareness. The child-autistist does not understand the borders of his body, does not perceive other people and does not see what happens around. If he suddenly realizes some action, he repeats him constantly, says the same words — so it seems to be clinging for reality.

The autists are afraid of all new, everyone understands, but are devoid of intuition and cannot participate in a conversation. They manicly arrange things and obsessed with passion for ordering.

The disease manifests itself differently. Some kids are silent, slow and calm. Others, on the contrary, are very mobile and can not sit on the spot. But each of them cannot leave their universe and does not know how to communicate with people.

It is believed to exist four degrees of autism. Those who are sick of the most severe of them, it is impossible to take into the world. Next degree — man can be interested in. And two other forms — Autist is relatively adapted in society, if you do it. All over the world it is believed that autism is best overcome if the child visits ordinary children's institutions. And teach custom-making children with communication, as the second language, although they will still forever remain in themselves.


Who works on Bill Gates?

There are a special category of people among autists — with scientist syndrome, or savant syndrome (the term psychiatrist Darold Tiffert, all life of the student of savates). Autical Savant — This is a person with extraordinary abilities, often in the field of account, art or music. At the same time, he seems mentally retarded.

Such people are very rare. Sometimes the abilities of the savance are not congenital, but arise as a result of injury of the head, especially the left hemisphere. Savante's brain acts as a whole, without sharing functions on hemispheres. And if in something one is a complete idiot, then in another — Absolute genius.

According to scientists, savants — This is an example of what we could be. In the brain of the Savante, the same mental processes flow as in an ordinary person. But the last consciousness turns on at the moment when the information obtained by the brain is fully processed and the image of the subject has developed; we see and remember only significant. And the savages do not switch from private details to the whole and have access to the entire brain data bank. Therefore, auto savages can memorize an incomprehensible number of facts, numbers, numbers, cards and lists, texts and musical works. In addition, they:

Why? Science unknown. Some of the savates have obvious neurological deviations, but the brain of most of the surveyed was and anatomically, and physiologically normal.
Not all autists are savants, and not every Savant — Autist. The probability of birth of an autistic savance — 1 to 80 million. Now there are about 50 people in the world.

Kim Peak — The only person in the world who is not just an autistic savant. Kim — Megasavant, ingenious in at least 15 subjects at the same time: mathematics, history, literature, music...

Kim was born on November 11, 1951 in Salt Lake City, Utah, with cerebral hernia on the right side of the skull and an enlarged head. When he turned 9 months old, the doctors carried the verdict: «Retarded». Later, during the examination of the brain of the peak, it was found that its hemispheres are not divided, but forms a unified storage area of ​​information.

At 16-20 months, the baby remembered all the books that he read from the first time and did not give them to reread them. In three years he asked his parents, which means the word «confidential». So it turned out that he had long been able to read himself. Kim in a joke advised to see the meaning of the word in the dictionary. He looked. Somehow the child immediately understood how to navigate it.

Today Kimputher, what is his name is close, remember more than 9000 books. Knows all the roads of the United States and Canada, the names of many professional athletes, actors and actresses, the content of the Bible and the doctrines of Mormonov, historical dates, works of Shakespeare, telephone codes. It easily identifies the classic musical works, when writing the date of writing and biographical data of composers. He knows the dates of the battles of all the great wars and know all modern events, can determine the day of the week coming to any date.

At the same time, it hardly dresses himself and forgets how to brush my teeth... Peak is not able to remember the sequences of movements; He learned to walk only at 4 years old, and climb the stairs — only in senior school classes. He still remembers every time he remembers how to defeat her. Whole days kim peak holds Salt Lake City in the Public Library. Tolstoy book he is enough for 25 minutes of reading: Megasavant reads two pages at the same time, one — left eye and another — right. From the first reading, he, as in childhood, remembers the book entirely.

«Rain Man» Removed based on the life history of the peak. The merit in its opening belongs to the screenwriter of the film, Barry Morrow. Before that, he wrote a scenario for a television film about the mentally retarded man named Bill. After the release of the film, Morrow was invited to a meeting in the Association of mentally retarded people, where he met Kim. Peak struck the scriptwriter with its phenomenal abilities, and Morrow immediately emerged the idea to write a script about him.

The hero of the film is named Ramond Babbit, and His Dustin Hoffman plays. Preparing for shooting, he, like Morrow, met with Kim and his father. Theme of their conversation was British monarchs, Bible, Baseball, Racing, Dates, Times, Traveling, Composers, Melodies, Cinema, Geography, Space Programs and Literature. As Fran Peak remembers, Hoffman said his son: «I can be a star, but you are heaven».

After «Man of rain» Kim's life has changed dramatically. He stopped living in a limited circle of relatives and friends, began to meet with people, learned to communicate and watch the interlocutor. According to the most modest calculations, since 1988, when the film came out, the peak came out with more than two million people, spending more than 100 days a year. Maybe thanks «Man of rain» In the world will be less than ice showers of alienation? As Morrow said: «I believe that one who spent near Kim at least five minutes, can not not change his views on himself, on the whole world and the possibility of man».

According to scientists, Kim Peak is still smarter from the year. At the end of last year, it was decided to undergo his brain research on the latest space technologies. Specialists from NASA will compare data from computer tomography and magnetoresonance display with earlier tests of the world's most famous autista, after which a three-dimensional map of its brain will be created. Scientists want to determine what exactly happens in the head of the peak when he thinks about different things.

P.S. If you want to take a look at the world through the eyes of an autista, I advise you to read the book Mark Haddon «Mysterious Night Murder Dog».