Home>Pediatrics>Children "Indigo": who are they? Part 1

Children "Indigo": who are they? Part 1

On the planet continue to be born extraordinary children! In France they are called "Teflon". In the British Isles - "Millennium Children". In Russia, they - "children of light." And they are called "indigo".

Several
years ago from different parts of Russia began to come strange information
- Then get thrown declared "magnetic" children. Thus, the 14-year-old Masha
Yepifanova from Nizhny Novgorod is nothing strange in their ability
hold metal objects does not see the body. She can spend hours
walk, hung spoons and forks (if friends ask).

More to
girl stick coins. But her friend, 13-year-old Tanya Svirina,
can hold not only on the coins and spoons, but also from the cover
pots. A magnetic boy Kolya Tenkaev from Saratov able to wear
irons on his body. 12-year-old Anna Zvereva from Novosibirsk has
the ability to attract objects of varying severity, not only with his hands,
but also with his feet. Ten Christine Gyularyan from Moscow
Queen "hung" to his palm, not only metal
items, but also thick magazines.

According to scientists,
biomagnetism dealing with the problem, the number of children who have
"Magnetic" powers, has recently increased significantly. If
previously known isolated cases, but now they have hundreds. Most
a real "magnet for children Boom" 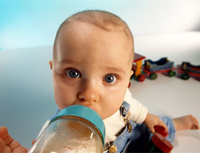 It happened in the mid-90s. Scientists this
explain the phenomenon can not, for that matter, and many other things,
what happens to the modern child. And doctors are also offensive
diagnosis deliver.

Wonder Boy
Bulat Khusainov was born in Kazan. In ten months, he already knew how to count
up to one hundred. In two years Bulat considered to be a hundred in three languages ​​- Russian,
Tatar and English. I loved flipping Dictionary Ozhegova. To a kindergarten
Bulat went to 1 year and 10 months.

The teachers were shocked,
find the baby, which is a quiet hour in his cradle singing songs
Shainsky. And this baby with a serious little face gave all
teacher interrogation: taking a pen, he once wrote,
on paper, "no meat" (this happened shortly after lunch).

Phenomenal
Memory Bulat was discovered when he was only 1 year 8 months.
Mother son read poems Agnes Barto. After the break, we open again the same
book, but the child himself heart began to recite poetry Barto. AT
first grade parents were advised to put a gifted boy on
psychiatric records, they say, the child is not quite normal ... Because
modern psychiatry in our country uses terminology
Soviet psychiatry, which has no concept of "autism" that Bulat
was diagnosed with childhood schizophrenia ....

In Western psychiatry autism -
It is not so much a disease as a state of mind (Bill Gates has
talented autistic programmers working in the highest
information technologies). Bulat well in school. He writes
poetry and loves to listen to "talk" fish in the aquarium.

Yet
a very unusual child - Boris Kipriyanovich - live in
Volgograd Region. In 3 years the kid showed strange astronomical
knowledge. It is fully described, it looks like the planet Mars. And he
It predicts the future. The world expects only two catastrophes: in 2009 and
2013. Both are related to water. So says the young Boris
Kipriyanovich.

Today, almost everyone forgot about Nick
Turbine, brilliant little girl who began writing "wise"
verses in 4 years. At 9 years old girl became famous throughout the Soviet
Union: she published a book of poems "Draft" (published by "Young
Guard "). He is overwhelmed by the glory: Nike patronized
celebrity, her collection of poems translated into 12 languages, she was given
the prestigious "Golden Lion" (from the Russian poets this award
He received only, Anna Akhmatova). Extraordinary girl predicted
a brilliant future, but the 27-year-old Nick broke down - she jumped out
window 2002 year.

ABOUT
extraordinary children, having a magnetic attraction, in our country
We are talking a quarter of a century ago. Over time, they were called
"indigo". Why are they so christened?

- Exactly like this
color is the aura of the "new" man - it is purple - told
"Arguments of the Week" psychologist Irina Hraznova. - Immunity indigo children in
25 times higher than that of ordinary children. And it has already been proved. There are interesting
figures of this kind today among 50-year-old Indigo - 1% among 30-year-olds
- 10, and among the 12 year old - 25%. But the high talent, genius -
it is always a deviation in the brain structure and mental development. So
find reputable scientists. According to the prominent Russian geneticist
Vladimir Efroimson such gift falls to approximately one out of a thousand,
develops in the right least one in a million, but really a genius
It becomes one of the ten million.

Efroimson
I studied the biographies of many prominent people. And to identify not only the entire
talented family, but also the correlation of genius with a number of congenital
abnormalities in metabolism. He believed that the task of education - to find and
uncover talent in children sequins - "stigma". The scientist many years ago
saw the existing pyramid formation overturned: the focus
It should not be given to universities and kindergartens.

But it seems that no one heard a scientist ...

-
Typically, to four years the child discovers 50% of the intellectual
abilities, which are destined to occur, - explained Irina Hraznova -
six - 70%, and eight - 90%. But today's kids abilities
It appears almost from the cradle. And the main thing - do not be late.
Intelligence, creativity - our national wealth. it
long understood the Japanese, who value their gifted children and
spare money for their education. Israel has its own effective
System training of gifted children. effective system established in the United States
promotion and development of giftedness.

IQ higher than that of George W. Bush

Who
It is these geeks color violet? Extraordinarily gifted boy
Paul Konoplev was born and raised in Moscow. Pasha was 6 years old when
experts revealed his unusually high intelligence - IQ 169 (from
43rd US President Bush's IQ - 91). The boy was named "sverhodarennym
a child prodigy. " Then the word "indigo" in our country has not been honored.
Pasha was only 3 years old when he learned to do in the mind complex
calculations and read fluently. I read with pleasure and fairy tales, and
university textbooks.

At 6 years old kid saw the periodic table
Mendeleev and understand its intricacies. The boy was trained by
individual program, since secondary school Pasha
It was the "black sheep": the first mark, which he had brought, was ...
unit.

But Konoplev of the first class immediately
He moved into the fourth round and became an excellent student. At 9 years old he decided to challenge
an illumination of the planet Pluto, when the sun at its zenith. The solution of the problem
was highly appreciated by Academician Andrei Kolmogorov (similar known
scientist himself was of the race of indigo - he became an academician in 39 years). In 14 years
Pavel Konoplev participated in the creation of software for
the first domestic personal computer BK0010, published his
work in "Science and Life" magazine. At age 15 he entered the M

But
nature, endowing human high mental abilities, like
include it in the risk group: these people often suffer. Paul first
I was in a psychiatric hospital for a long time ill. He died in September 2000
was, he was only 27 years old. Today they say that Pasha was from Konoplev
indigo race.

They understand the language of birds

Between
the number of street children is increasing in our country every
year. Among them is indigo. What awaits us in the near future?

director
Project "Nonlinear communication" Zhebit Vladimir, who has long
tracks "indigo" theme, commented "Arguments of the Week"
the situation from the perspective of a new scientific approach:

-
Ingenious personality were at all times and in all civilizations. Mozart,
Leonardo da Vinci, Vincent Van Gogh - their rank as typical race
indigo. But the concept of "superintelligence" often confused with the concept of
paranormal abilities. At Indigo observed phenomena as
outstanding mental abilities and skills such as
ESP, telekinesis, and even teleportation. Unfortunately, not yet
clear idea of ​​whether people with similar talents,
It can be attributed to indigo.

In case if
really opened some genetic differences, it will be possible to
confidently say that we are dealing with a new race of people.

And those children who today joined an army of street children should be supervised: what will happen when they grow up?

That is not to appear among us frank monsters?

They have a different skull!

how
the need to deal with these children? Since 1989, in Moscow at
Psychological Institute of the Russian Academy of Education works
Laboratory dedicated to gifted children. They began to appear for school
gifted children. This led the five-year kids. But most importantly -
We have created a customized program for each of the ordinary
child.