What is mega and dolichocolon? What are the symptoms and how to treated this disease?
Read this article.

Dolichocolon - this elongation colon and megacolon - its extension. In the case when such changes affect only the sigmoid colon, use the term mega / dolichosigma.

Dolichocolon - a congenital long thickbowel wall hypoplasia nervous apparatus followed by the addition of organic changes and progression of its wall and the mesentery due to intramural plexus lesion, dysfunction and the development of inflammatory processes.

Some researchers think that may dolichocolononly be congenital disorders. Other authors believe that dolichocolon can be acquired condition with a variety of reasons. For example, cases are described where the misuse of laxatives and enemas resulted in a lengthening of the colon and in the elderly dolichocolon associated with metabolic disturbances in the wall of the colon. Congenital dolichosigma contributes to constipation and constipation - dolichosigma development due to the formation of mechanical obstacles to progress on the gut contents because of its atony and "tortuosity". The result is a vicious circle.

In the case of maintenance of normal luminal diameterand the absence of changes in the muscle layer of the colon and elongation it is not accompanied by impaired mesentery bowel function. With good propulsive function dolichocolon dolichosigma and have no clinical manifestations. In case of violation intestinal motility develop bloating, abdominal pain, and constipation. During the inspection, attention is drawn to bloating, palpation - soreness of the colon segments, especially the sigmoid.

Diagnosis is by colonoscopy or barium enema. Passage through the intestines assessed using radiopaque markers or isotope.

Treatment is aimed at eliminating constipation. Occasionally, in the case of persistent long-term constipation, surgical treatment (resection of the elongated portion of the intestine).

Megacolon and megarektum used whenradiograph diameter rectosigmoid department or descending colon exceeds 6.5 cm, ascending colon - 8 cm or when the diameter of the cecum is more than 12 cm Megacolon can be a symptom of diseases such as congenital (Hirschsprung's disease) and idiopathic megacolon (resulting from any chronic constipation. origin), intestinal pseudo-obstruction (pronounced manifestation of motility disorders of the digestive tract). Toxic megacolon as a serious complication of inflammatory bowel disease and infectious colitis in the scope of this article.

Acquired megacolon can be provokedconstipation arising for various reasons. The conclusion that there can be acquired megacolon in case the expansion of the colon was not observed with the earlier inspections. The most common cause of acquired megacolon are atonic constipation, which are observed in the young and the elderly. In children, this form of megacolon easily confused with congenital extension colon (Hirschsprung disease).

The colon is able to expand, and therefore,possible formation of acquired megacolon. As will be shown below, even in the absence of mechanical bowel obstruction colon can sometimes grow to frightening proportions. Proof that enlargement is a common pathophysiological reaction of the colon, also serves as toxic megacolon syndrome. If earlier it was believed that the expansion of the colon was observed only in ulcerative colitis, it has now become clear that the Crohn's disease, amoebic, pseudomembranous colitis, and specific infections can also cause this dangerous complication.

The best proof of purchasemegacolon patient is radiographic evidence that the earlier colon he had not been extended. Unfortunately, such information is not always available, so megacolon considered to be acquired if it can not detect any congenital abnormalities or constipation appeared later than in infancy. When the diagnosis of acquired megacolon should find out the cause.

It is of some interest terminology. Megacolon means expansion of the colon caused by non-mechanical cause. In this case, the rectum is normal size. Megarektum suggests that increased rectal reservoir, sometimes significantly. Perhaps a combination of megacolon and megarektuma, but not all patients with megacolon megarektumom suffer, and vice versa. In this regard, it is important to accurately establish the diagnosis, t. To. Used therapeutic and surgical methods of treatment vary depending on whether the gut affected. Acquired megacolon megarektum and, strictly speaking, they are different diseases. It is also important to note that these terms do not refer to a lengthening of the colon (dolichocolon) which often is defined in patients with chronic constipation, but it is possible without them.

Causes. Although the exact cause, provokesand acquired megacolon megarektuma not known, none of the segments of the colon is not aganglioznym. This position - a kind of hell, delimiting congenital and acquired forms of the disease. Although myopathy digestive tract can be the cause of megacolon in patients with this disease is not always broken peristaltic activity of the stomach and small intestine. On the other hand, chronic pseudo-obstruction, patients with digestive tract, r. H. Stomach and small intestine, peristalsis may be delayed, but often do not have an extension of large intestine and rectum.

Among adult patients with megacolon andmegarektumom can distinguish two groups, depending on the timing of the onset of clinical manifestations. Some people begin to suffer from constipation in early childhood (usually up to age 1). Other symptoms develop after 10 years, or even in adulthood. In the first group constipation, fecal spotting clothes appear in early childhood; in the second group is dominated by constipation and abdominal pain, but the soiling of laundry is not marked. If the symptoms began to appear in early childhood, acquired megacolon is considered organic because there is no corresponding psychopathology (such a change of mentality with irritable bowel syndrome). On the other hand, chronic acquired megacolon, manifestations of which begin later, sometimes occurs when a child negativism because they deter the act of defecation in the period when he taught to use the potty or toilet.

Diagnostics. The main difficulty consists in the differentialdiagnosis of congenital and acquired megacolon, for which complaints, medical history and physical examination data is usually not enough and needed an X-ray and endoscopic studies.

Gauge data anorectalallow us to estimate the presence of rectal reflex, which also helps the differential diagnosis of acquired and congenital megacolon. Have saved reflex indicates the existence of intact ganglia, t. E. The lack of Hirschsprung disease. However, if this reflex is absent, it does not mean that the patient suffers from Hirschsprung's disease. Sometimes it is difficult to identify due to reflex inhibition of chronic dense fecal function of internal anal sphincter. If the reflex is absent, and the Overflow bowel faeces is not observed, it is necessary to conduct a biopsy of the muscle wall of the rectum over the anorectal ring. In patients with diffuse megacolon usually a delay in the passage of the colon to the line. On the other hand, patients with megacolon or megarektumom with undisturbed passage of fecal masses suffer uncomplicated bars that do not require surgical treatment.

Content Passage on the colon and rectumconveniently evaluated by introducing a radiopaque marks. The patient swallows the same number of radiopaque markers at the same time of the day for three consecutive days, with each day marks have a different shape. Then, an overview abdominal radiographs at the same time of day for the fourth and seventh days. When comparing the results with the standard can easily conclude the state of passage through the large intestine in a particular patient, but if this retarded passage, it is possible to assess in what segment is the colon occurs. If the promotion of content on the intestine is slowed down, then make a conclusion about constipation, but not megacolon or megarektume, t. To. The constipation may be caused by numerous other factors. Data on the intestinal passage may also be clarified using radiostsintigrafii using a gamma camera.

Treatment. The purpose of medical treatment or megacolonmegarektuma is to achieve timely release of gut feces and prevention of intestinal obstruction. If necessary release from the intestine of fecal stones are sometimes used manual method under anesthesia, using cleansing enemas and laxatives (if possible to avoid irritating laxatives). Patients need to develop a reflex to defecate after a meal.

If drug treatment is ineffective, theuse surgery. Selecting the operation depends on an accurate diagnosis and state motility intestine. For example, for patients with megacolon and slow passage of contents, ileostomy or bowel recommend the imposition ileoanalnogo anastomosis, depending on age, lifestyle and physique of the patient. However, it should be noted that after the imposition of ileorektalnogo anastomosis persist in some patients constipation, especially if you have not been remedied pelvic floor function. After this surgery, patients usually recover anus reaction to irritation, and they are normally controlled by a bowel movement mechanism. Ileostomy is more often used in older people.

For patients with megacolon, but normaldiameter of the rectum and defecation mechanism is considered the procedure of choice ileorektostomiyu, including elderly patients. Patients with megarektumom, colon diameter and normal defecation mechanism disorders subject Duhamel operations or the imposition of colon-anal anastomosis. In the latter case, the entire extended resection of the rectum, which avoids the formation of fecal stones in the cult of the colon, often resulting in patients after surgery Duhamel. 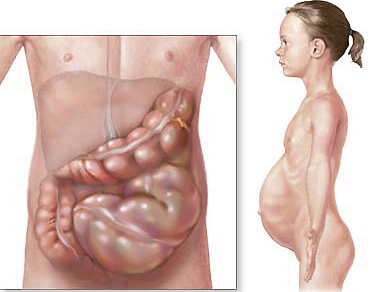 Acute megacolon is a serious complicationcolitis and intestinal infectious inflammatory diseases. Sometimes, acute megacolon develops in patients without prior overt disease of the colon or mechanical bowel obstruction. In this case we are talking about pseudo-obstruction of the colon (Ogilvie's syndrome). The causes of acute megacolon may also be trauma, abdominal surgery or pelvic organs, metabolic disorders (hypokalemia) or neurological diseases.

Causes. The exact cause of acute colonic pseudo-obstructionulcers is unknown. However, the majority of patients indicate held on the eve of surgery or injury. Whatever it was, Ogilvie's syndrome - a perfect example of the expansion of the colon in the absence of mechanical obstruction passage. Increased willingness of the colon to expand in response to physiological and pharmacological stimuli - the basis of the pathogenesis of Ogilvie's syndrome.

Manifestation. A typical patient with Ogilvie's syndrome iselderly people, which is in a state of convalescence after surgery, made on the eve of a few days, and already take food per os. The abdomen had swollen considerably, breathing is difficult, but the signs of peritonitis and leukocytosis is observed (at least in the early stage of the disease). Survey abdominal radiography reveals a significant stretching of the colon due to the accumulation of gases. Normally, the small intestine can not be seen. The diameter of the cecum at this stage of the disease - 9-10 cm.

Treatment. Food intake per os should be discontinued, the liquidadministered parenterally, install a nasogastric tube. Next is assigned to a water-soluble contrast enema to rule out mechanical intestinal obstruction and pseudo-confirm. Upon confirmation of the diagnosis of rectal use decompression tube and enema, correcting electrolyte disorders (hypokalemia). With the lack of effectiveness of treatment prescribed cisapride, erythromycin, neostigmine. Neostigmine administered at a dose of 2.5 mg intravenously over 1-3 min. At this time, the patient must be connected to the electrocardiographic monitor, it is necessary to prepare atropine. Neostigmine will work after 2-20 minutes. The scheme can be repeated up to three times in sequence to achieve a positive result.

In the future, the ineffectiveness describedtreatment and cecal diameter of more than 11 cm is performed colonoscopic decompression. Gases and liquid stool continuously aspirated but a small amount of air (or carbon dioxide) is fed into the intestine. No need to reach the cecum to provide sufficient decompression; the location of the endoscope at the right (hepatic) flexure of the colon with aspiration located proximally content usually reduces the pressure in the ascending colon. Decompression tube can be left, but its effectiveness is questionable. Spend radiological control. If the diameter of the cecum decreased, the patient can be kept on until enemas, and gases until the chair will not depart spontaneously. Although colonoscopy decompression usually has to be repeated, it is effective in 80% of cases, while the remaining 20% ​​of patients require surgical intervention.