I do not like spiders and sharks, afraid of the dark, fearfly a plane, I was afraid of crowds on the subway at rush hour, I just hate to speak publicly and very afraid to go blind or crazy. Here, perhaps, the whole list of my fears. And if you dig, each of us can find a bunch of these fears at ... 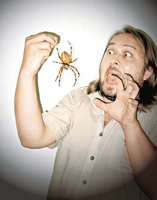 Many of our fears are not fears, and phobias. A phobia - it is mental disorder in which a person cover obsessive inadequate experience to their fears.

According to statistics, every 8th person in the world suffers from some phobia. And the number of phobias that torment modern people already incalculable.

So how do you know - just a man afraid of spiders or suffer from arachnophobia? Just does not like dentists or suppressed dentofobiey?

With what it is connected?

Surprisingly, but - with the progress. After all, along with the aircraft mankind has acquired aviafobiey; tragedy at Chernobyl has created fears of radiation - radiation phobia; because of the arms race appeared nukleonitofobiya - fear of nuclear weapons, as well as atomasofobiya - the fear of a nuclear explosion. With the study of the cosmos humanity was fear of cosmic phenomena - kosmikofobiyu; and many elderly people suffer kiberfobiey - fear of computers. The development of science contributes to the appearance of people gellenologofobii - fear of scientific terms. And also there (unless it is a fiction) gippopotomomonstroseskvippedaliofobiya - fear of long words.

Advertising is also actively promotes the appearance ofa variety of fears. Thanks to her man begins to fear completeness (obezofobiya), skin acne (aknefobiya), wrinkles (ritifobiya), alopecia (falaktrofobiya), aging (gerontophobia), microbes that everywhere (verminofobiya) and so forth. And the use in advertising and show business immaculate , perfect, perfect in its beauty models, generates a BDD - fear of unattractiveness of the body.

And how many phobias spawned modern cinema! All sorts of horror movies with realistic special effects and mystical thriller promote the development of the fear of spiders, sharks, aliens, fear to go mad (such films as "A Beautiful Mind," "Spider" and many others), the fear of clowns (eg, fearful clown Monster Pennivayz from the movie "It" by Stephen King), fear of phone calls (the Japanese "Ring" thriller).

Famous people in plain sight, their phobias - too. For example, NV Gogol suffered tafefofobiey (fear of being buried alive). This fear was so painful that he repeatedly gave his friends a written order - to bury him only in case there will be already cadaveric changes.

Generalissimo JV Stalin suffered toksikofobiey (fear of being poisoned). And Peter I suffered all my life acarophobia (fear of insects) and was not able to work in rooms with high ceilings, indicating a propensity to spatseofobii (fear of empty spaces). Preserved until now Peter's house in St. Petersburg is interesting made at the request of the king of low false ceiling, hanging to high, and this creates the effect of "cozy casket."

Modern show business simply full of differentphobias. He is afraid of clowns Johnny Depp. Sean Connery makes no traffic lights, Matthew McConaughey is afraid of revolving doors, and Kim Bessinger - strangers touching, because of what can go for months without leave home. The acute form of the fear of microbes suffer, Michael Jackson, Jodie Foster, Jennifer Lopez and Julia Roberts. Steven Seagal terrified of being poisoned. Sharon Stone as fire, electrical afraid, she shuns even include a TV, because, in her opinion, it may explode. The list goes on and on ...

However, I would like to find out - how it allReally. Most often, the birth of phobias associated with some event in childhood. Wink is a phobia can many years later, so it is very difficult to understand often - how it all began. In fact, everything is not so started, and many who believe that suffering from phobias - just experiencing normal aversion to particular subjects or situations.

What is the difference between fear of phobias? The difference is that with a phobia is almost impossible to cope on their own. Once in a situation that triggers a painful reaction, a man covered with cold sweat, his pulse quickens, there trembling, weakness, possible vomiting. The man starts to choke, he has the irresistible desire to run aimlessly. These feelings are so unpleasant that patients have resorted to all sorts of tricks in order to avoid such situations. If you have not seen these symptoms, you may not worry - you do not have anything serious. And even if there is something like that, too, do not worry - it is now treated. If you have a phobia prevents live - should consult a doctor.