Home>pulmonology>How is the treatment of bronchitis

How is the treatment of bronchitis

Bronchitis treatment depending on the form. What the therapist uses drugs for the treatment of acute and chronic bronchitis, including obstructive.

Treatment of bronchitis is a serioustask. Very high risk of chronic process makes any physician to treat with great attention to each patient. It is used all the resources available to the medicine.

The most common illness caused by viruses. Therefore, in the treatment of acute bronchitis antibiotics in the first hours since the beginning of the disease, it is meaningless.

Hospitalization in most cases the disease is notneeded. The treatment is performed on an outpatient basis and begins with the appointment of abundant warm drink (tea with lemon, raspberry jam or honey, preheated mineral water).

In the first day or two from the beginning of bronchitis effective antiviral drugs such as rimantadine. immunomodulatory agents are also used (interferon).

It is necessary to take into account the likelihood of developingCandida vaginal lesions in women and violations of intestinal microflora in all patients, regardless of gender. For their prescribed fluconazole prophylaxis and / or Linex (options: Subtitle, bifidumbakterin). 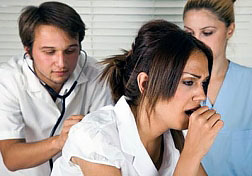 Depending on the stage of the disease can be administeredantitussive and expectorant drugs. First used in the beginning of the disease when sputum discharge of yet. These include libeksin, glaucine, bronholitin, solpadein. The latter is used for the liquefaction and improve expectoration of sputum when it is already synthesized in sufficient quantities. For this purpose, use ambroxol, bromhexine, acetylcysteine.

Antipyretic (fever-reducing) used inincrease in body temperature over 38 degrees, and severe pain in the chest. Possessing analgesic properties, aspirin, ibuprofen and paracetamol effectively reduce the temperature, and decreasing the brightness of pain. Keep in mind that aspirin to children under 15 years are absolutely contraindicated. This is due to the risk of Reye's syndrome - a serious and irreversible damage to the liver and brain.

In the treatment of chronic bronchitis, particularly the obstructive form, medical tactic is somewhat different. In the first place there out measures to normalize the breathing function. To do this:

The release of the bronchi by mucus is produced in two ways: medical and non-medicated.

The first is to use a variety of means, liquefies phlegm and increases its movement towards the exit of the bronchi. It includes:

There are mechanical or non-pharmacological methods to facilitate sputum discharge:

Click to enlarge the lumen of the bronchi must be atchronic obstructive bronchitis. To this end, use of ipratropium bromide (Atrovent), which often combine other drugs. Very effective complex medication: Flomax, ipraterol, ipramol. In their application speeds dyspnea and improving lung function. However, cupping better suited salbutamol or fenoterol as their action differs high speed.

Eufillin for intravenous useoutpatient setting does not recommended because of the high incidence of side effects. Pelletized form with the success of the drug is used as a maintenance therapy.

To combat the inflammation is usually used analgesics, antipyretics. Aspirin thus are not recommended, since it often causes an allergy, resulting in deterioration of the patient's condition.