Types of surgical treatment of obstructive sleep apnea type. What uvulopalatofaringoplastika? Possible complications during and after surgery.

Removing enlarged tonsils and adenoids, which may violate the airway lumen. This is especially true in children.

Laser uvuloplastika - This operation is very effective in the treatment ofsnoring, but for the treatment of sleep apnea syndrome, it is not necessary. The intervention is excision with laser uvula and part of the soft palate. Since this operation helps to eliminate the most important sign of sleep apnea - snoring before surgery is recommended to explore the nature of sleep.

Tracheostomy - This method is used in severesleep apnea syndrome. The trachea is a small hole in it and inserted tube. Thus air flows to the lungs through the tube. The results of this operation is quite successful, but it is applied only in those patients in whom other treatments are ineffective.

Other methods of surgical treatment of sleep apnea:

UPPP - a procedure aimed at removingexcess soft tissue of the mouth (soft palate, pharynx, tonsils) in order to expand the lumen of the respiratory tract. It is used to relieve the air permeability in the treatment of obstructive sleep apnea syndrome type. 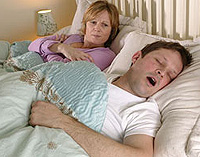 If the main cause of obstructive typesleep apnea syndrome is an enlarged tongue, the surgeon excised small fragment. In this case, the operation is called uvulopalatofaringoglossoplastika.

The operation is usually performed under general anesthesia. After the surgery may require continued use of continuous positive airway pressure (CPAP), which facilitates breathing during sleep and prevents spadenie airways. Some painkillers cause relaxation of airway muscles. Therefore, after the operation is to avoid the use of such funds for the prevention of apnea episodes. These medications include narcotic painkillers (Promedolum, morphine).

UPPP procedure is chosen as a method of treatment of sleep apnea syndrome in:

Children usually do not apply UPPP. For them, more often than not it is sufficient that a tonsillectomy or adenoidectomy.

It should be remembered that the UPPP can fullyeliminate snoring, but the patient may continue to suffer sleep apnea syndrome. Some studies worldwide indicate that UPPP procedure yielded positive results in the treatment of 40 - 60% of patients. However, even with the positive results of surgery, the patient may feel the need for the use of continuous positive airway pressure (CPAP).

Possible complications during and after surgery

Complications during surgery include accidental damage to the surrounding soft tissue and blood vessels.

Postoperative complications may include:

It should be noted that before deciding onsurgery, it is worth to try to try conservative treatment, namely continuous positive airway pressure (CPAP). After the operation UPPP should conduct a study on the nature of sleep (polysomnography) to determine whether the positive results observed operations. If after surgery, you will still experience episodes of apnea, should continue to conservative treatment.

In recent years, increasingly used laseruvuloplastika. This operation is different from the normal UPPP in that it is more economical and safer. It is based on the fact that the laser is a kind of "vaporizes" the edge of the soft palate and uvula. Unlike UPPP uvuloplastiki laser procedure may require re-implementation in order to achieve a better result. The number of procedures can be up to four. During this procedure also removes the tonsils. Although laser uvuloplastika is characterized by a smaller number of postoperative complications, pain after surgery remains moderate.