Respiratory diseases are often accompanied byprolonged inflammation in the respiratory tract and symptoms such as prolonged cough, bad departing sputum, shortness of breath and respiratory failure, and sometimes seriously impair quality of life. Therefore, the main treatment strategy should be aimed at changing the biochemical composition of mucus and its removal from the airways.


Respiratory diseases are often accompanied byprolonged inflammation in the respiratory tract and symptoms such as prolonged cough, bad departing sputum, shortness of breath and respiratory failure, and sometimes seriously impair quality of life. Moreover, the detainees disease can lead to severe complications.

The main reason why the disease is “no wayfails ”, is a poor cleansing of the respiratory tract from sputum. Viscous thick sputum, which is accompanied by bronchopulmonary diseases, blocks the mobility of cilia on the surface of the mucosa. As a result, a large amount of sputum accumulates in the respiratory tract, which is difficult to cough, and often painful. Therefore, the main treatment strategy should be aimed at changing the biochemical composition of sputum and removing it from the respiratory tract. This is how the mucolytic Lazolvan acts. The effectiveness of the drug is based on several mechanisms of action. 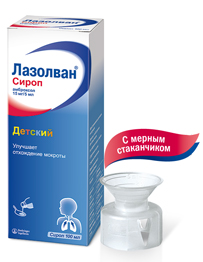 Lasolvan active substance - ambroxolhydrochloride - breaks the connection between mucopolysaccharides phlegm, stimulates serous cells of the mucous glands, increases the amount of mucous secretion and activates hydrolyzing enzymes. As a result, changing the biochemical characteristics of pathological mucus, it becomes less viscous, it is diluted. A more liquid mucus coughed much easier.

Also under the influence of stimulated Lasolvanproduction of surfactant - a protective substance that supports the alveoli in the "straightened" state. In this state, the alveoli are fully operational and exercise effective gas exchange. At the same time the drug activates the movement of the cilia of the epithelium, which accelerates the transport of mucus. This is a rapid and "physiological" removal of mucus from the respiratory tract. Speaking of Lasolvan mucolytic effect, it should be noted that it is the only drug in the group of drugs, which activates the ciliated epithelium of the bronchi.

But Lazolvan is not only effectivemucolytic, it also has antioxidant, anti-inflammatory and immunomodulating properties. Mucosolvan relieves inflammatory processes in the tissues of the respiratory system, inhibiting neutrophil chemotaxis, production of interleukin-1 and histamine. An increase in the production of immunoglobulins (IgA, IgG) contributes to the activation of local immunity in the lungs and bronchi.

A significant advantage of Lazolvan ishis fruitful “collaboration” with antibiotics. Lazolvan accelerates the process of passive diffusion of antibiotics through the blood-alveolar barrier and increases the bioavailability of antibiotics in the lung tissue. During clinical trials, it was reliably established that with the joint appointment of Lazolvan and antibiotics, the recovery time is reduced.

It is also important that Lazolvan, being originalit has been well studied and has a number of advantages compared to generics: biological protection, fewer adverse reactions, especially allergic ones. In a number of works devoted to the studies of Lazolvan, it was noted that with its use, the likelihood of complications from the gastrointestinal tract is much less than with ambroxol-generics. Therefore, Lazolvan is allowed for use in peptic ulcer disease, and some other serious diseases.

The use in therapy of bronchopulmonaryLasolvan diseases allows the patient to reduce the recovery time frame to pass a shorter course of antibiotic therapy, and to avoid the potential risks of side effects.