About the treatment, which requires cervical myositis

Inflammation of the muscles of neck and shoulder girdle and cervical myositis can not treat. - In principle, the illness may "pass itself." But not without a trace ...


What is cervical myositis

Cervical myositis - an acute inflammation of the musclesneck and shoulder girdle, which can occur in anyone, even completely healthy person, as a result of stress, hypothermia, sleep posture in a failed or work in an uncomfortable position. But often, cervical myositis is triggered by a draft.

The disease usually manifests itself in the morning after sleep,a day or two after the traumatic effects of the previously mentioned. During this time, "zastuzhennye" inflamed muscle fibers are swollen, their reflex spasm occurs, which causes irritation of the nerve endings and pain.

The pain caused by myositis, usually spreadson the side of the neck from the nape of the neck to the shoulder; but if you are involved in cervical-brachial plexus and major nerves, the pain can spread hand to your fingertips. According to the observations of doctors, it occurs in 10-15% of cases.
Inflammation of nerves when myositis is almost alwaysasymmetrical: pain on one side is stronger than the other. Regardless of where came the inflammatory process, pain in myositis is always very strong: cares absolutely can not turn his head or move his hand sore.

In carrying out the correct therapeutic measures in70% of the attack passes without a trace for a period of 3 days to 2 weeks. If untreated, prolonged attack. The pain becomes less intense, but sore muscles spastic "distort" the neck, and provoke the development of further damage: Offset (subluxation) of the intervertebral joints of the cervical spine or the appearance of herniated disc.


How to get rid of cervical myositis 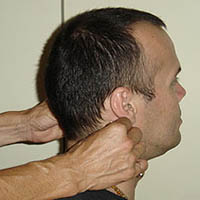 Despite terrible pain, cervical myositis treated quite easily (in the event that treatment is started immediately and the attack did not take long character).

Firstly, ill experienced doctor will adviseIt is possible to complete rest. The patient area should be lubricated with ointment warming, and inside to take anti-inflammatory drug. The best effect is produced by novocaine blockade - obkalyvanie the most painful parts of novocaine affected muscles with the addition of corticosteroid hormone. The therapeutic effect of novocaine blockade of the evident almost immediately after the procedure: reduced muscle inflammation and pain disappears.

According to the observations of doctors, to achieve positive results, using only post-isometric relaxation in the treatment of cervical myositis, manages approximately 90% of patients.