parasitic fungus is able to settle on the skinpoison the lives of everyone. And especially a lot of hassle and grief is a fungus, who settled on the skin of the feet and the nails. Women who are victims of this fungus in the first place occupies the outer side of the issue? cracking, peeling skin, yellow crumbling nails. However, according to doctors, aesthetic problem here is not the main, we are talking about a serious disease - nail fungus, which requires long-term treatment.


The fungal disease appears first on the skinstop, often in the interdigital folds. Between the fingers appears peeling, accompanied by burning and itching. Then there are bubbles that burst, forming cracks and sores. If you do not start immediate treatment, the fungus spread to the nails. Once in the nail plate, it continues to grow and multiply. Despite its slowness, the fungus gradually stratifies the nail gradually fills it and introduced into the nail bed. Over time, the affected area is not only captures the nails on your feet, but also on the hands. It occurs even internal organ damage - fortunately quite rare. 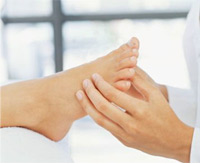 Manifestations of the disease on the nails depend on the type of fungus, as well as on the degree and depth of infection.

Having crossed to the nail plate, dermatophytosisusually stain yellow spots or longitudinal stripes on the sides of the toenails. In some cases, the disease can be guessed by the appearance of bright yellow stripes or spots in the center of the nail plate. On the hands, the nails are also “decorated” with similar stripes, but lighter - whitish or grayish in color. Yeast fungi thin the nail plate from the sides, while it lags behind the nail bed and acquires a yellowish color.

Often, the disease begins with the nail rolls,usually on hand. The rollers thicken, swell and redden, silvery scales appear along the edge, the nail skin gradually disappears. A bacterial infection may join the process, in which case even suppuration is possible. The nutrition of the tissue in the area of ​​the roller is disturbed, as a result, transverse furrows appear.

Mold fungi can cause onychomycosisonly against the background of an existing malnutrition of nails that arose due to other diseases. In this case, the color of the nail plate also changes, it can be yellow, green, blue, brown and even black, but the damage to the nail remains superficial.

However, do not diagnose yourself.independently, especially since nail damage can be caused by several fungi at once. In addition, the fungus is, although frequent, but not the only cause of serious problems with the nails.

Noticing the signs of fungus, do not hope that everythingwill disappear by itself. The longer the fungus lives on your nails, the more difficult it is to treat and the worse for the whole body. Prolonged onychomycosis can provoke an allergic reaction, weaken the immune system and lead to an exacerbation of chronic diseases.

Therefore, the most correct at the very firstsuspicions - consult a mycologist or dermatologist. The doctor will not only conduct an examination, assess the thickness, structure of the nail, but also make tissue scrapings for analysis. Only in this way can he determine the presence of the fungus, its appearance and prescribe adequate treatment. In this case, the doctor will take into account the prevalence of the process, the form of the lesion, the presence of concomitant diseases, the rate of nail growth, etc. Nowadays, there are highly effective drugs of general and local action for treatment.

In the initial forms of the disease, when the areanail damage is insignificant, you can limit yourself to local treatment - applying to the nail bed 2 times a day an antifungal drug (antimycotic) with a wide spectrum of action in the form of an ointment, cream or solution. Before applying the medicine, special preparation of the nails is carried out.

In some cases, it is necessary to go for the removal of the nail plate with subsequent treatment. After this, a new nail grows, although its surface may be uneven at first.

Whatever treatment the doctor prescribes, for somethe time you turn into a disinfector. The doctor will write a prescription according to which the necessary solution will be prepared for you in the pharmacy. Before the start of the course, they will have to process all available shoes, all socks, gloves, etc., and then, once a month before the growth of healthy nails, they need to process the clothes and shoes that had to be worn during the treatment.

To avoid trouble, you have to bemore attentively. The troubles can turn into a visit to the pool, bathhouse, gym and even the beach, sun-calcined. The causative agents of onychomycosis are amazingly resistant to external factors.

Compliance with simple rules will protect you from the disease: