For mixed pyoderma are several formslesions of the skin. Treatment of the disease is carried out only by a dermatologist. Used for antibacterial treatment and drugs for immunotherapy.

Chronic deep ulcerative pyodermaoften localized in the lower limbs. It usually begins with phlyctenas - a small bubble, which is surrounded by red (hyperemic) rim. In the future, the vial is opened, and an ulcer is formed rapidly increasing, which is located on the edge of a dense cushion inflamed skin up to 5 mm wide. In this roller there is an increase ulcer size. At the same time may appear multiple ulcers. In their place are superficial scars.

Vegetating pyoderma localizedmainly in large folds of the skin on the scalp, oral mucosa. The process begins with the formation of bubbles, not associated with hair follicles. With the spread of the merger of the eruption formed large areas of the lesion with irregular outlines, their surface becomes wet, in some cases, the deposition of the cake. At a resolution of lesions in their place remains pigmentation.

Chronic ulcers is usually localized pyococcuson the lower extremities. The process begins with a painful redness (hyperemia), a small swelling, then there blisters or pustules that rapidly ulcerate. The resulting painful ulcers surrounded by inflammatory edema rim by which it increases, reaching in some cases the value of palms and more. Ulcers can be round or irregular shape, resulting in destruction of the purulent central part it is rapidly widening. Later purulent masses are separated, the bottom of the ulcer becomes clean, smooth, bluish-purple color, and becomes liquid discharge, purulent. Crusts are formed. sores scarring lasts a long time. The process usually begins with the center. Simultaneously, there may be several ulcers.

Shankriformnaya pyoderma characterizedadvent mainly on the external genitals, face, red border of the lips, oral mucosa, tongue, bubble, after the autopsy, which form erosion or ulcer 2 cm in diameter round or oval with a seal at the bottom. The amount of discharge from the affected surface of the small, often shrinking in the crust. It is usually found streptococci and staphylococci. Regional lymph nodes are enlarged. After allowing the bubble, which is usually a single, may remain superficial scar.

Treatment and prevention of mixed forms of pyoderma 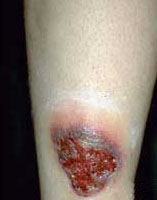 Treatment of mixed forms of pyoderma holdsdermatologist or dermatological outpatient hospital, depending on the severity of the manifestations of disease. It includes the use of antibiotics, vitamins, specific and non-specific immunotherapy, physiotherapy, locally recommended disinfectants.

Prevention of pyoderma is aimed at contentskin clean (regular cleaning and linen), its protection from injury. Microtrauma should immediately handle disinfectant. Of paramount importance are measures aimed at increasing the body's resistance.

To avoid contamination, which is particularlyprone children, you must beware of their close contact with patients with pyoderma. It systematically examines staff of children's institutions and dismissed from the work of persons, even with minimal manifestations of the disease. Prevention of pyoderma in a production environment consists of the general sanitary, sanitary measures, including personal protection, personal hygiene working and hygiene education.