The diagnosis "psoriasis" is often made by a dermatologist ortherapist from the characteristic external features and location of lesions on the body. If the patient has observed changes in the skin that are typical for psoriasis, to diagnosis, clinical examination is sufficient. 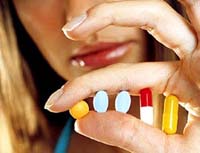 How to diagnose psoriasis?

When atypical picture or suspected psoriasis
Additional studies may be required of the child. In cases
when the clinical picture is unclear, the most accurate method - a biopsy
skin. To take a biopsy a small piece of skin (about 6 mm in diameter)
which is transmitted patomor-phology - a doctor who specializes in
Microscopic examination of tissue samples. results of the analysis
Pathologist describes in a special report - conclusion.

how
Typically, one biopsy is sufficient, however, if the outcome is uncertain or
also, if Also, if the nature of the disease over time
changes, a second biopsy. The patient can ask him
issue a copy of the opinion, and the majority of doctors prefer to once again
carefully study it before you prescribe medication. special
blood test for psoriasis does not exist, and blood counts is
disease is usually not affected.

In psoriasis, blood tests more often
all done in order to ensure the safety purpose
a new drug or check to see if side effects occurred.
The exception is severe psoriasis, who seized vast
surface of the body - in this case, the protective function of the skin changes
may lead to dehydration, or violation of the salt balance
blood.

If the patient is hurt or swollen joints,
It must be tested for psoriatic arthritis. This diagnosis is usually
puts dermatologist, rheumatologist, orthopedic surgeon or other specialist in
diseases of the joints. As a rule, carried out X-rays,
examination of the joints and blood tests to check whether caused by
arthritis from other causes. It is important to remember that psoriatic arthritis can
develop in any patient with psoriasis. To avoid irreversible
joint damage, it is important to conduct a survey and quickly
prescribe treatment.


What affects the skin in addition to psoriasis?

In
Most people psoriasis appears only on the skin. However helpful
know and the less common forms of the disease. In addition to skin psoriasis
It can affect the nails, joints, and - at least - other organs.

Mucous membranes. Sometimes
Psoriasis affects the mucous membranes of the lips, mouth and tongue. at
the defeat of the language it appears sharp jagged boundaries separating
the darker and lighter areas, like a map. Hence arose
the term "geographic tongue" - although it must be noted that this is in
the absence of psoriasis.

Joints. Psoriasis,
manifests itself in the form of arthritis, can affect the joints, especially in
fingers. This so-called Psora-matic arthritis.

Eyes. AT
rare cases of psoriasis appear red around the pupil
painful rim. This condition is called though, and the front
uveitis. Sometimes it is the first symptom of psoriasis and diagnosed
ophthalmologist.

What causes exacerbation of psoriasis?

In
Psoriasis occurs different people differently. In some periods of improvement and
alternate degradation (according to seasons or
other factors), in others the disease does not recede ever
It is shown continuously with the same force.

In some patients,
aggravation happens from time to time. Although the reaction of each patient
individual, some precipitating factors, including drugs
money and stress are common to many.

Stress.
Emotional and physical stress can cause aggravation
psoriasis. Sometimes it manifests itself after weeks or months after the event,
cause stress. The reason can serve a variety of events, from
global changes in life, such as death of a family member or a change
work to transition to a new diet or cold.

Many techniques help
to relieve stress (yoga, meditation, etc.), a family vacation
circle or communicate with pet. Just avoid the disease and
stress is not possible, however, to be careful, you can just
notice signs of deterioration and take necessary measures.

Drugs.
Any drugs (or change) can affect the skin condition. AT
Specifically, there are several classes of drugs that can
cause exacerbation of psoriasis. Among them:

These
medication does not necessarily cause aggravation. However, if after
I start taking some of them aggravated psoriasis, talk with
doctor can be replaced drug.

the
the same should be done if the psoriasis is exacerbated after the start
receiving or increasing the dose of any other medicines. However, always
It must be borne in mind that exacerbation could provoke not itself
drug (e.g., an antibiotic, designated at infection) and disease
which it treats.