What is the "floor" of baldness

According to statistics, about 35% of men begin to feelsigns of baldness as early as 25 years of age. As for women, they are no exception and are also subject to defeat scalp. The difference lies only in the fact that each floor has its own nuances

What is the "floor" of baldness 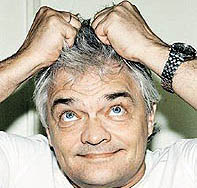 According to statistics, about 35% of men begin to feelsigns of baldness as early as 25 years of age. As for women, they are no exception and are also subject to defeat scalp. The difference lies only in the fact that each floor has its own nuances that affect the appearance of signs of baldness, the effects and treatment.

Doctors identify several types of alopecia -alopecia areata, high front line of hair growth, hair loss is traumatic. And two types of alopecia, which are specific to each gender group - androgenic alopecia (male pattern hair loss) is very rare, only 5% in women. Temporary hair loss - female type of hair loss - according to statistics 95% of the fairer sex susceptible to the disease.

Features of hair loss in men and women. The causes of alopecia are varied - it could be stress or physical overload, environmental factors, chemical, in some cases allocated genetic predisposition. But what exactly distinguishes female from male pattern baldness?

Even in the times of Aristotle was noticed interestingfact, male eunuchs never had a bald head. And in the XX century D.Gamilton found the cause turns out to be male sex hormones "annihilating" act on the hair follicle. How does this happen? It is known that the life cycle of the hair follicle is three phase. In the first phase - anagen - for several years the follicles are in active development position. During catagen (the second phase) - the hair has already been formed. In the final cycle - telogen, is rest.

It was at the time of the anagen phase, the male moleculehormones - dehydrotestosterone, penetrate into the cell and a negative effect on its nucleus. In the cell nucleus, irreversible changes that lead to the termination of the hair follicle. Thus, the structure of the hair is changed, it becomes thinner. So begins androgenic alopecia - hair loss in men.
What else characterizes the male pattern hair loss? This heredity from both the mother's and father's side. Also, male pattern baldness is a special form of the "crown", ie, lesions appear on the top and front of the head.

With regard to women - the situation is more complicated. If 90% of men in the appearance of baldness and heredity plays a selection dihydrotestosterone, in women to determine the cause must be a thorough medical examination. Its conclusion should give such doctors - gynecologist, endocrinologist, dietitian, a neurologist. Since the impetus for hair loss may be hormonal disorders, lack of receipt of food nutrients, stress imbalance, thyroid and pancreatic disease. In general, a woman loses her hair all over the head and the hair restoration process is reversible. Only in rare cases, only 5% of women there is androgenic alopecia.

So what conclusion can be drawn one - baldness is "sex".