Home>stomatology>Bruxism, or "gnashing of teeth"

Bruxism, or "gnashing of teeth"

Bruxism, or gnashing of teeth at night is not a disease, but it often causes a lot of trouble. Read about the causes of bruxism and the treatment of this phenomenon. 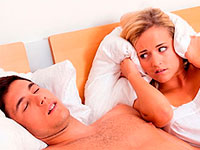 According to various reports it affects about 1-3%people in the world, children and adults, men and women, rich and poor, healthy and sick. Bruxism does not choose Me sacrifices and occurs with equal frequency among all segments of the population. Night gnashing of teeth is in each person, but people suffering from bruxism, it becomes a real problem, evidence of the problems in the body and brings great harm to health.

The clinical picture of bruxism

It is quite specific and is characterized byday or night unconscious teeth grinding, which lasts from a few seconds to a few minutes. Attacks often occur bruxism during sleep, repeated several times during the night, and the tapping of the teeth is accompanied by increased heart rate and breathing, increased blood pressure, that is typical of the reaction of nervous excitement.

It is clear that he is not suffering from bruxismhears their "night concerts", he sees and feels their effects - prikushennye teeth and tongue, painful sores on the mucous necks, sore muscles and joints of the lower jaw, skived "on the stump" teeth, dental caries, periodontitis. 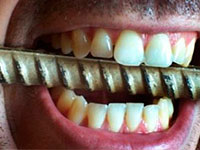 There are several versions of thebruxism. The cause of spastic contraction of muscles of the lower jaw, causing knocking teeth, some see the bad habit of biting various objects, such as pencils or pens. As a result, the muscles of the day "remember" repetitive motion, and at night during sleep continue to perform "routine work".

Bruxism is often seen as a result ofcongenital malformations and acquired diseases of dental system, such as malocclusion, presence of supernumerary teeth or on the contrary the loss of elements of the dentition. By "gnashing of teeth" are prone people suffering from epilepsy, Parkinson's and Huntington's diseases.

The most common occurrence of theoryBruxism is the theory of chronic stress. Stressful situations are associated with increased brain activity, often accompanied by stressful anticipation, alcohol, nicotine, abuse of coffee, taking tonics. All this leads to the appearance of static excitation area in the cerebral cortex and insomnia characterized by sensitive shallow sleep, frequent waking up.

The theory of stress confirms that bruxismoften accompanied by a feeling of dissatisfaction with sleep, morning headaches, daytime broken, drowsiness, pain in the muscles of the neck, back and shoulder girdle, tinnitus, vertigo, depression - all those "charms", which usually causes chronic stress. So bruxism indicates the psychological discomfort of man and warns of the danger of developing mental disorders.

How to win bruxism? Treatment with relaxation

First of all, we note that to confirm the diagnosis"Bruxism" is possible by using electromyography and polisomnologicheskogo study, in which registered spasmodic contraction of masticatory muscles, leading to a sharp clamping jaws. 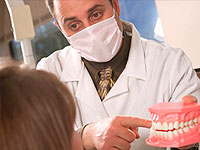 At the forefront in the treatment of bruxism shouldspeak increase resistance to stress, mastering the techniques of relaxation and stress relief. Perhaps, at this stage the best way - to seek help from a therapist, because the accumulated problems will sooner or later lead to the emergence of mental disorders and physical comorbidity.

Some experts recommend for a daykeep the jaw in the open position. Others advise bedtime bore chewing muscles, nibble sunflower seeds, nuts, dried fruit chew. Still others believe that relax the muscles of the jaws help a hot compress on the lower part of the face. However, it seems that these methods are secondary in relation to the total relaxation of the nervous system.

With bruxism - to the dentist!

Since the main trouble waitingpatient bruxism - abrasion of tooth structure, a visit to the dentist is a must. Early treatment of caries and periodontitis, removal of tooth enamel defects, correction of occlusion, prosthetics help to keep your teeth, and in some cases get rid of tooth grinding.

To prevent dental injuries in the treatment ofbruxism used special protective caps, resembling aligners are made on an individual basis in accordance with the anatomical structure of the dentition.

In severe cases, bruxism resorting to injectionsBotox. The introduction of botulinum toxin into the masseter muscle weakens part of its fibers and prevents the occurrence of involuntary spasms. Injections relieve bruxism only for the period up to 6 months, at the expiration of this period, they should be repeated.