Home>stomatology>Healthy gums - a life without pain

Healthy gums - a life without pain

Today, in a fashion to take care of their smile. Install braces, teeth whitening - this is the most popular procedure. But gums we are not used to pay much attention. Meanwhile, according to the World Health Organization, 80% of the world's population suffers from diseases of the gums.

Why
swell and redden gum?

Gum disease arises from the microbial
clusters. Reproduction of bacteria in the tissues of the gums - a natural process, the main
do not let them have begun to actively multiply, and release toxins
provoke inflammation. Contributes to this, first of all, failure to comply with
or poor oral hygiene.

Gingivitis and periodontitis, in fact, two stage single
inflammation. Gingivitis - an initial phase, which gives a lot of
discomfort: redness, swollen gums, pain when chewing,
bleeding, and even bad breath. All these unpleasant symptoms
able to "unsettle" any representative of the fair sex. Not only
reduced quality of life: the gums ache, she can not enjoy the food spoils
mood, there is self-doubt and stiffness in communication.

If gingivitis is not treated in time, then in its place
It comes periodontitis. It is even more unpleasant symptoms, and over time,
It can lead to tooth loss. Gum disease may also indicate the beginning of
serious diseases like kandidozilistomatit - appearance in the oral cavity
painful sores.

how
reduce inflammation of the gums?

Remove the pain and eliminate
swelling with inflammation of the gums to help a unique dental gel
Holisal complex action. The drug relieves discomfort after
two or three minutes after application, and due to the adhesive gel base is not Holisal
It washed away by saliva, so the medical and anesthetic effect lasts up to 8 hours. 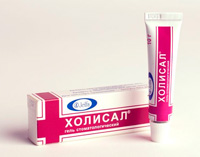 The advantage of the drug
in that it acts directly on inflammation: choline substance
salicylate is rapidly absorbed oral mucosa, providing a local anesthetic and anti-inflammatory effect. Plus, the effect on the cause of Holisal
inflammation - eliminates germs. Its constituent material tsetalkoniya chloride
effective against bacteria, fungi and viruses.

efficient
the prevention of gum disease is the correct hygienic care of cavity
mouth. Unfortunately, brush your teeth twice a day, as testified in childhood
parents sufficient. What is important is not the fact of tooth brushing and equipment. Process
It should last for at least two minutes. Begin brushing your teeth in a circular motion,
then hold the brush on top
down, "sweeping" plaque. After that, clean the chewing surface.

It is also important to choose the right toothbrush. Dentists are advised to choose a brush of medium hardness and
change it every two months. Even better, if you purchase an electric
a rotating brush. Studies have shown that it removes 98.2% of plaque on
Compared with the conventional brush which removes only 48.6%.

Also, use
mouthwash after every meal. Every six months, dentist
- He will hold a professional teeth cleaning and will assess the condition of the gums.