The main manifestations of lung abscess

The concept of lung abscess

There are the following forms of lung abscess:

The causes of the abscess

Abscesses and gangrene of the lung arise as a consequence ofobezvozdushnosti lung tissue (due to atelectasis or inflammation), circulatory disorders in her direct effect of toxins on the airless lung tissue with impaired circulation. As a rule, it leads to abscesses, which arose because of pyogenic flora: Staphylococcus; streptococci; E. coli; mycobacteria, fungi (Histoplasma capsulatums, Aspergillus, koktsidioidy), parasites (amoeba, lung fluke).

The main manifestations of the disease

Acute lung abscess is characterized by pain in thechest, shortness of breath, cough with purulent (stinking), sputum, hemoptysis often. The sudden release of a large number of (full mouth) fetid sputum - a sign of a breakthrough in the abscess cavity bronchus. Typically a temporary improvement in the patient's condition. 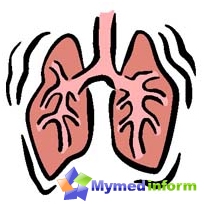 Gangrene lung. Gangrene of the lung is called necrotic inflammation of the lung tissue with severe symptoms spread on lung tissue, leading to rapid necrosis.

Among patients aged male-dominated30-35 years, women suffer 6-7 times less, due to the peculiarities of the production activity of men, more common among them alcohol and tobacco abuse, leading to a violation of the drainage function of the upper respiratory tract.

It is very difficult to proceed multiple abscesseslung. Multiple abscesses usually preceded by widespread inflammation in the lung. Against this background, in several areas there is necrosis of the lung tissue, which is between the abscess does not recover its normal structure. Weights condition develops purulent bronchitis with profuse foul-smelling sputum department.

The following types of complications of lung abscess:

Clinical cure the majority of patients withlung abscess formation is completed in light of scar tissue (Pulmonary fibrosis). In the lung parenchyma with no infiltrative changes. Patients feel almost healthy work, but they are more likely than other people, there are cough, mucous expectoration, fever, are treated as colds, acute bronchitis and bronchiectasis. The main features that distinguish focal fibrosis of the lung abscess, are significantly lower incidence and severity of acute disease, lack of purulent intoxication and infiltrative changes in the lungs.