Home>Urology, Nephrology>Exacerbation of gout: it devil as he is painted?

Exacerbation of gout: it devil as he is painted?

Gout - chronic disease characterizedthe deposition of uric acid salts in organs and tissues. The disease occurs in the form of attacks, which are replaced by light intervals of varying duration. What are the symptoms of acute gout and what are they?

"Nothing special. Mrs. Grinkort left for six weeks in Mentone,
but a few days ago I came back. There was a major attack of gout. "
S. Maugham. Cakes and ale 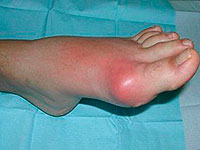 This disease inspires creativitywriters XIX - early XX century: his descriptions are often found in the literature of the period. Apparently, the disease was so common, that was seen as an integral part of a full life.

From a scientific point of view, gout - a chronic,disease occurrence which is associated with metabolic disturbances, in particular to the metabolism of purine bases, leading to the accumulation of uric acid in the body. The disease is manifested attacks of acute synovitis and arthritis, deposition of uric acid salts in various organs and tissues.

Why there is gout?

The etiology of this disease is colorfully described instories and novels of the XIX century. Lush feast, plenty of poultry, meat, fatty, fried foods, flowing river wine and beer. Today it is proved that it is the constant use of fatty meat, chicken and dry wines leads to a sharp accumulation of urate in the body and exacerbate gout.

If you dig deeper, the immediate causeGout is a lack of or insufficient activity of enzymes involved in the metabolism of purines. Along with this, the development of gout can result in kidney diseases accompanied by a disturbance of their function, salts of uric acid retention in the body, deposition of urate crystals and tissue development in arthritic inflammation.

In eight out of ten cases of gout occurs in the form of acute attacks of arthritis that occur after the abuse of fatty foods and alcohol, after hypothermia or joint injury.

Sometimes gout exacerbation preceded by a shortprodrome period, as the precursors of the disease appear weakness, fatigue, mood variability, nervousness, headache, increase in body temperature up to 37,2-37,4 degrees Celsius. Already at this stage there may be vague feeling in the joints in the form of an ache, heaviness and dull pain.

Sam gout attack usually starts at night, onbackground of full health. The bones of the big toe area there is a sharp pain, joint swelling rapidly, the skin over it is stretched, it becomes smooth, shiny, hot, red, then purple-blue. The body temperature rises to 38-39 degrees, the patient is literally paralyzed with pain, but it can not be crossed - the joint is completely immobilized.

In the subacute form of gout mainly affects the joint of the big toe, the pain is not strong and the changes in joint tissues are not too pronounced.

Rheumatoid shape resembles gout rheumatoid arthritis, occurs with the defeat of the small joints of the hand or wrist, but it does not capture more than one bone joints.

Heavy flows abscess form of the disease. Exacerbation of gout in this case is accompanied by fever, chills, a pronounced inflammation of the joints, outwardly resembling purulent fusion of tissues in infectious arthritis.

Meets periartriticheskaya form of gout that affects the tendons surrounding the joint muscles, such as Achilles tendon at the site of attachment to the ankle joint.

Other manifestations of gout

Besides arthritis, gout exacerbation may haveother symptoms. The accumulation of uric acid salts in the skin within 5-6 years after the onset of the disease leads to the formation of tophi - surrounded by connective tissue arthritic subcutaneous nodules, with a yellowish color and containing urate crystals. Tophi often located on the back surface of the forearm, elbow joints, the joints of fingers and toes, on the hips and legs. They can be found on the ears on the forehead, in the cartilage of the nasal septum.

Exacerbation of gout can lead to thinningcontent and release tophi out through the fistula formed in the skin. Unlike conventional ulcers contents gouty nodules is not pus, does not contain any microorganisms as urate have antibacterial properties.

Almost half of the patients with gout attacksdiseases accompanied by renal colic, which is manifested by sharp pains in the lumbar region and in the course of the ureter, a violation of urine and often complicated pyelonephritis. 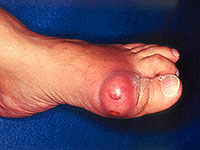 Exacerbation of gout, ie its attack, usuallyIt does not last long, and sometimes lasts for days, sometimes stretched to 5-10 days. The pain gradually disappear, joint swelling subsides, the skin over it becomes a normal color, joint function restored. Over the years, acute gout often lucid intervals are getting shorter. In severe cases, it develops gouty status - a condition where the acute gout continuously replace each other and transform the patient in a disabled person.

Repeated inflammation lead to deformationjoint, limit its mobility. The disease spreads to other articular joints, gouty arthritis occurs, leading to limit the patient's ability to work.

Gout - a serious illness, and even thoughthat the heroes of the novels of the XIX century lightly treated to short bouts of illness, the reality turned out to much more grim. One-third of patients with gout develop gouty nephropathy, leading to persistent renal dysfunction and renal failure in 40% of cases are fatal.

Somerset Maugham in "razor sharp" vividly describedcase of nephropathy with gout, "Elliot lithemia attack, and the doctor said his condition is serious. This time the attack took place, and it is better, but severely affected kidney and a full recovery is not possible <...> his face fills the terrible pallor of blue, it comes from the sickening odor, characteristic of his illness ... He goes into a coma. "