Abnormalities of number and size of kidney

Anomalies of development of kidneys are relatively rare. Consider anomaly in the article number and size of the kidneys.


Anomalies of development of kidneys are relatively rare. All existing renal anomalies can be divided into:


Abnormalities of number of kidneys

This pathology, which is celebrated at the fullthe absence of one or both kidneys. Aplasia of both kidneys - a pathology incompatible with life, so these infants are not viable. This is a fairly rare disease. At the same time one of the renal aplasia occurs relatively frequently - 4 - 8% of all cases of kidney abnormalities. Note that the kidney cell aplasia can often accompanied by other birth defects. Manifestations of renal aplasia has. Diagnosis of this anomaly is mostly random nahodnoy. Mainly it uses ultrasound of the kidneys and eksekretornaya urography and angiography. It is important to understand that a person with renal aplasia -. It is the so-called. a patient with a solitary kidney, so when her illness must be treated as much as possible gently to preserve the function of the kidneys. The remaining kidney grows in size, because it has to do double duty. The danger of this condition is that it can not be removed with a single kidney disease.

Doubling of a kidney

This pathology is more common in children. If aplasia is more common in boys, then twice the bud - in girls. Doubling the kidney may be either single- or double-sided. Furthermore, a doubling of the kidneys can be either complete or incomplete. At full doubling has two kidneys two ureters, which open into the bladder individual mouths. 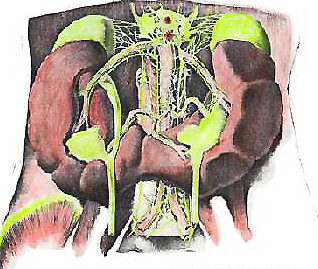 Incomplete same doubling of notes usuallyfusion ureters to any level. By doubling the kidneys can very often meet and other pathology - ureterocele (gryzhepodobnoe protrusion of the wall of the ureter into the bladder). Manifestations of the double kidney can be:

Development of pyelonephritis more often if this anomalyall contribute to a violation of the outflow of urine, because this pathology is combined, as we have said, with the ureterocele (widening of the ureter in its area, which is part of the bladder wall), which is manifested in the form of vesicoureteral reflux (PMR). The same reason also plays a role in causing kidney stones.

Diagnose Kidney doubling usingcystoscopy (there is a third of the ureter mouth instead of two), excretory urography (reveal an increase in the size of the kidney, ureter and third pelvis) ultrasound. Doubling the kidney and does not manifest itself requires no treatment. However, abnormally developed kidney, especially with the full doubling, often develop any disease. Most often there urolithiasis in one half of the double kidney, hydronephrosis, pyelonephritis. Sometimes a full doubling of the kidneys accompanied by ectopia ureter. In this case, it does not fall into the ureter into the bladder, and in the other body. The mouth of the ureter may fall into the rectum, cervix, vagina, urethra. It is possible the constant leakage of urine from the ureter.

Surgical treatment is carried out at double the kidneythe presence of complications. It is aimed at correcting the reasons cause complications. Produce a variety of endoscopic and open surgery. The kidney is always trying to save. Remove the kidney (nephrectomy) only if virtually complete loss of its function. Sometimes spend nephrectomy - removal of half or part of the kidney.

Extra kidney is rarely occurring anomalydevelopment. Typically, the additive is below the normal kidney in the lumbar region or lower in the pelvis or lower abdomen. Most often, the extra size smaller than normal kidneys. Extra kidney has its own separate blood flow (renal artery and Vienna) and its ureter. The ureter extra kidney could fall into the ureter normal kidney or opened the mouth of his own bladder.

Surgical treatment of additional kidneyIt is held if there are diseases of the kidneys: hydronephrosis, urolithiasis, tumor, chronic pyelonephritis. Removal of the kidneys is carried out at a loss of its function or if complications arose threatening the patient's life. The children in good health should be conservative therapy and continuous monitoring of the condition of the kidneys, and the general condition of the child. If possible, try to keep the kidney

Hypoplasia (underdevelopment). When this anomaly of the kidney of normal shape and structure, but smaller. Kidney function is normal. Manifestations of renal hypoplasia usually occur when acceding to the infection when developing pyelonephritis.

Hypoplasia may be one-sided anddouble-sided. Detect Kidney hypoplasia helps ultrasound data excretory urography and radioisotope studies. Even on a normal chest radiograph can be seen reduced kidney size. If excretory urography detect reduced renal pelvis and calyx. During the renal arteriography specify the size of the kidneys. This same study also helps to distinguish renal hypoplasia from diseases associated with a secondary decrease in kidney size (nephrosclerosis).

In unilateral hypoplastic kidney treatment is usually not required.

The need arises in the treatment of hypoplasia,in the kidney when developing any disease. Often, hypoplastic kidney pyelonephritis occurs. If it is complicated by the wrinkling of the kidneys and renal resistant hypertension. In adults, in this case, resorted to remove the kidney (nephrectomy). In children, if kept more than 30% of kidney function, kidney are trying to save. But in severe cases, remove the kidney.