This disease is known since the time of Hippocrates. Even then, it tried to be treated with surgery. Today, with varicose veins are fighting very different and even quite painless way.

However, people are still reluctant to be recorded on thewelcome to phlebologist. And for good reason. The diagnosis of varicose veins, according to statistics, we can now put every second. If your feet are not visible mesh and stars, it does not mean that the disease is not caught up with you.

Varicose veins is now a widespreaddisease - says phlebologist, surgeon and physician clinics CM Salamat Hamitovich Biseken. With him men and women face a completely different age. More often - 25-40 summer, although this limit is arbitrary: sometimes to see me come even 17-year-old girl.

Where did he come from?

There are several theories of origin of varicose veins:

Thus, theories and hypotheses of originvaricose veins is now very much. But as doctors joke when a lot of theories, the true cause is unknown. The most common version of the associated still with a hereditary factor: if the parents have varicose veins, then it can occur in children, and grandchildren. Sometimes the disease does not manifest itself in any way. But rejoice not worth it anyway: to provoke him with having bad heredity can every detail. For example, if a person is sitting or, on the contrary, stand-up life, - says Dr. phlebologist Saiganov Sergey.

- The blood supply of the body play a role, manyfactors. To the blood constantly moving and well needed reduction of the heart, the negative pressure of the chest muscle contraction and so on. But when a person is constantly sitting or standing, some of these factors are excluded, then the disease will necessarily have an effect. Women provoking cause may be hormonal in Applications, how, for reasons internal and external - for example, while taking contraceptives. While categorically claim about the connection between oral contraception and the beginning of the disease will not be any one person, however, it is known that hormonal drugs, including contraceptives, often contribute to the progression of disease or complications of already existing varicose veins. In addition, the disease can provoke a pregnancy when to the same hormonal background is added to the increase in weight due to fetal growth. That's why with the available genetic factors before pregnancy is best to visit phlebologist.

However, According to experts, even in the absence of a genetic predisposition to the disease, the person may still suffer varicose veins.

How does it manifest itself?

Varicose veins - this is a serious disease in whichthe veins lose their elasticity, stretch and expand. Venous valves play a role of locks: when the blood passes through the valves, lock is closed and does not release it back. Once such a system starts to break down, blood flowing freely down and stagnates in the legs. Varicose veins or varicose veins due to the fact that the veins can not cope with the bloodstream, reaching for him. Obviously, blood flowing through the veins of the legs upwards, that is, against the force of gravity. This is accomplished through several mechanisms: the blood pressure of the arteries (the most insignificant contribution), the reduction of the leg muscles during movement (it acts as a pump) and the presence in the veins of valves that prevent backflow of blood (top to bottom). It is the failure of the valve to perform its function and causes a disturbance of venous blood flow, which leads to hyperinflation veins. Increasing venous lumen in turn further deteriorates the operation of the valve, since it can not block the diameter of the lumen. Reset blood down increases. That is a vicious circle. 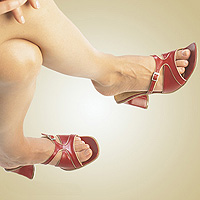 Symptoms of varicose veins: twisted veins, protruding above the surface of the skin of legs and feet, pain in the legs, combined with edema in the beginning, and then the changes in the skin. Changes in skin initially expressed in skin dryness, pigmentation of her (it darkens, becomes brownish color in the form of spots). Later, join the so-called trophic disorders in the form of poorly healing wounds such as eczema and even ulcers. Pain most concerned about in the evening or in the afternoon.

There are primary and secondary varicoseveins. Primary is associated with weakness or impaired venous wall - the development of the disease contribute to pregnancy, obesity, prolonged stay in a standing position, congenital weakness of the connective tissue, the wearing of stockings with tight elastic bands. Secondary varicose veins often occurs as a result of violation of the venous outflow, when the valves do not do their job, as well as in tumors and injuries. However, the degree of distension of the veins with varicose veins may be different. And the most unpredictable consequences. In the pathology of veins increases primarily tromboembalii risk, which, as is known, can be fatal blood clots .. Source lower limbs, although they may be - and veins in the arms or stomach. Another complication sores that appear when trophic changes, one small scratch can cause the growth of ulcers that are very difficult to fight, if you miss the point. People try to treat them for decades, and only some had in his time show phlebologist. In addition, by occupation phlebologist faced with yet another manifestation of varicose veins - bleeding when the disease started to such an extent that the veins protrude a centimeter above the surface of the skin and can even hurt due to microscopic injury. And of course, everyone has read about thrombophlebitis with lethal consequences.

One should always monitor the condition of their veins andremember that thrombophlebitis of the more dangerous, the closer to the heart of the inflammatory process - that is, if redness, pain, swelling, seal found near the groin, the higher the risk of death. But even if you find these symptoms below the knees, you still need to immediately call an ambulance.

Varicose veins are unique in thatpain occur in the early stages, as well as thickening of the veins reduces pain. The first symptoms of the disease: pain and burning sensation in the legs, and the severity of itching, swelling, darkening of the skin and seal the shin. In many cases varicose veins determined visually, but this is not always possible, especially in the case of deep veins. Through them, the blood enters 90 percent (through 10 percent of the superficial veins) in the reverse direction, and the formation of blood clots in them particularly dangerous. Therefore, if you feel pain, heaviness, heat sensation in the legs, especially after long-term and a fixed standing or sitting, or leg cramps and swelling in the ankles, you have to undergo a medical examination? Of course, not all unpleasant sensations in the legs associated with varicose insufficiency, but in any case, their constant expression should be alerted.

How to deal with it?

Treat varicose veins for several centuries. However, until the 19th century are not always treated led to a positive result, there are cases and deaths. Today the methods have changed radically: they have become less traumatic, less invanzivny. The same procedure is notorious sclerosis, which was done a hundred years ago, it is now greatly changed. However, you should still know that the earlier we start the fight against varicose veins, the easier, less painful will this fight. Coagulation - with the help of struggling with the harbingers of varicose veins and spider veins asterisks. The doctor acts on diseased vessel or laser electricity, resulting in the vessel disappeared. One of the main methods of treatment of varicose veins in many countries - sclerotherapy for varicose veins. Sclerotherapy - removal of varicose veins, comprising intravenous administration of special preparations - sclerosants. Po¬razhennaya Vienna as if glued to the inside and stops working, blood flowing on the healthy veins. in experienced hands the procedure is safe and practically painless. Sclerotherapy is performed on an outpatient basis, the patient has been eliminated from the normal life. Sclerotherapy sessions are held once a week. The duration of treatment depends on the form and stage of the disease. The average required three to six treatment sessions for each leg, and three to five injections of sclerosant in one session. The positive cosmetic result of treatment is shown in a few weeks after the last treatment. After treatment by sclerotherapy in a bloodless removal of varicose veins improves blood flow in healthy veins, the processes in tissues restored supply to disappear or the symptoms of the disease are greatly reduced. Operational method. It is, of course, can be avoided. If we turn to phlebologist at the initial stage of the disease. However, even if you are running your veins, it is not necessary to be afraid of the operation. Operational procedures today, there are several: for example, measures miniflekbektomiya done without incisions, endoscopy allows for the operation in the hospital one day.

How to prevent it?

Prevention is the best thing that can makefor themselves any person. Ointments, gels, compression hosiery, selected specialist, will reduce the risks. Once again I repeat that preventive measures are selected by a professional and not with the help of friends advice. The same compression hosiery its degree of compression phlebologist assigns based on the size of the patient and the condition of his veins.

Preventive work should be attributed, andthe other, very simple rules: take a contrast shower, do not abuse the sauna, solarium, steam rooms, hot tubs, wear comfortable shoes with heels no more than four centimeters (at a higher shoe calf muscle does not contract in full, resulting in koleno- jog and knee stagnation occurs, changing posture, mixed center of gravity, which inevitably leads to varicose veins).

Varicose is the responsibility of vascular surgeons, who decide how to treat the patient in each case.
Get phlebologist consultation and can be diagnosed in the center of Phlebology CM-Clinic at the following addresses: