Atherosclerosis aorta develops much earlier than other forms of atherosclerosis, but no symptoms are watched for a long time.The disease detects itself only to 60-70 years. We reveal the cunning disease... 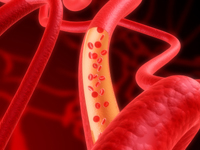 Aorta is the largest arterial vessel of our body. Aorta takes the beginning of the left ventricle of the heart, and then branches the many smaller vessels heading for all organs and tissues. Aorta consists of two departments passing in different anatomical areas of our body:

What is aortic atherosclerosis

Symptoms and signs of atherosclerosis of the thoracic aorta

The first symptoms of atherosclerosis Aorts appear aged 60-70, when the destruction of the walls of the aorta has already achieved significant scale. Patients complain about periodically emerging burning pain (Aortalgia), there is also an increase in systolic blood pressure, dizziness appear, difficulty of swallowing.

Other less specific features of atherosclerosis of the chest aorta can be too early aging and the appearance of gray hair, abundant hair growth in the ear sinks, the appearance of light stripes on the outer edge of the iris, the soverees on the skin of the face.

Symptoms and signs of atherosclerosis of the abdominal department of aorta

Symptoms Signs of an atherosclerosis of the abdominal aorta may be as follows:

Thrombosis as a result of atherosclerosis

Thrombosis of the vessels supplying the intestine leads to the death of the intestinal loops and the development of massive inflammation of the abdominal and peritoneum organs (peritonitis). Symptoms of thrombosis of visceral vessels This: strong pains that do not pass under the action of painkillers or spasmolitics. The sharp deterioration in the general state of the patient is quickly joined. The emergence of such symptoms in patients with abdominal ischemic disease should be caused by urgent appeal to the doctor. Without providing medical care thrombosis of visceral arteries necessarily leads to peritonitis and death of the patient.

Stages of development of lymphostasis

Vessels under the control of the doctor